After a slightly cloudy start the morning brightened and warmed up nicely. Intending to check out Fenlake I walked down the west side of the main lake, ticking Reed Warbler (2) and Blackcap on the way before stopping off at the disabled access fishing swim to scan the main lake. I picked up the Black Tern (BT) almost immediately in amongst the c.12 Common Terns. Changing plans I continued around the south side of the lake, having texted the info to DK and EN. I stopped off at several points along the south side trying to get a decent picture of the BT but it stubbornly stayed over near the island. A beautifully marked Sedge Warbler sang from a bush behind me and Chiffchaff and Blackcap also chimed in. Seeing John I called him and told him about the BT so he joined me to check it out. We then checked out Fenlake which seemed to be dead, excepting a single Heron! Back to the main lake with Garden Warbler at the winter wildfowl section gate, we met up with DK and later TP and spent a while chatting and trying to look disinterested in the BT so it would come closer. Needless to say it didn't and even sending TP off along the bank to flush it back toward us failed. Despite this a few grainy images were obtained. 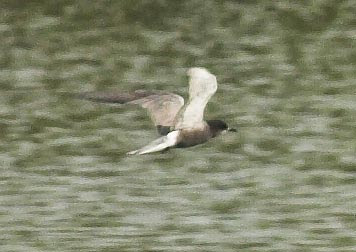 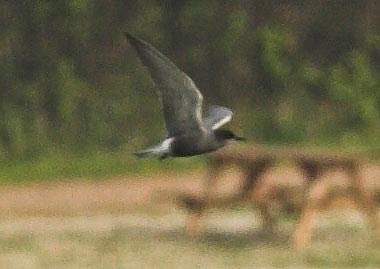 TP had been trying to find a Kingfisher for his month list so we took great pleasure in telling him 2 had just flown out to the island and back to the south side. He didn't locate them again. Myself and John continued around the main lake checking out, a rather crowded canoe slalom, for Grey Wagtail on the way, a futile exercise.

More Blackcaps and Chiffchaffs singing in almost every tree, particularly Blackcaps. At the spit we flushed a pair of Gadwall on west Fingers. 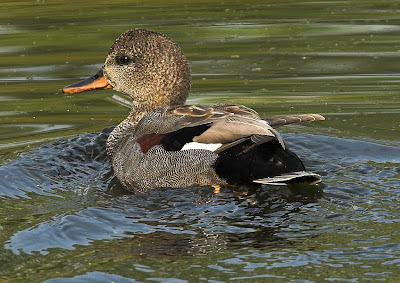 Surprise of the morning was a Little Egret on West Fingers, in the fallen tree, seen from the end fishing swim. The pair of Great Crested Grebe were still sitting tight as were the Mute Swans. A Coot put in an appearance. Little of note on east Fingers although a Canada Goose fight was quite entertaining with 2 locked in a death grip before both disappeared below the water! I never new CGs could swim underwater but one certainly made it's escape by that route and the victor followed with just the tail showing above the surface.

In the crescent Reed Warblers have taken over the reed bed with the odd Reed Bunting and a Chiff is still singing in the trees around but a new Garden Warbler was also in the trees giving a good opportunity to compare this song with that of the Blackcap further along the Spit.

Heading along to the Steps another Chiff was singing and a Reed Warbler was singing by the Steps as we walked down to the Rough. Lesser Whitethroat was heard along with a couple more Chiffs and several Blackcaps as we walked alongside the Rough and turned down towards the Sedgewick Seat. We stopped there to look for Butterflies in the nettles and I thought I heard a couple of Wood Warbler trills and given the earlier post from TP I wish I had followed them up!

We continued along the Long Hedge and checked out the STW reed bed where the Sedge Warblers were still holding territory with at least 3 singing males seen/heard. We cut through the Long Hedge to New Meadow but the hoped for clutch of warblers failed to materialise this week with just Blackcap by the steps and Common Whitethroat some where in the meadow.

We cut back across the meadow and checked out the main lake for the Black Tern which was still flying about, frustratingly close to the south side! At the car park a Lesser Whitethroat was heard and located in fenced scrub on the east side of the car park. Willow Warbler was also singing. Another good morning in the park.

A Wood Warbler was singing at the southern end of the Long Hedge at
Priory
this morning. Only the fourth site record and the first since 1995!

Also, one Black Tern on the main lake.

The expected drizzle and showers failed to materialise early on and in fact it turned out to be another cracking morning.

Chiffchaff 11 (including 2 on the south bank of the river, either side of the boat club moorings)
Common Tern c.13
Greylag Goose 3 main lake, departed to north east.
Reed Warbler 3 (1 showing well by the sailing club near the disabled access fishing swim) 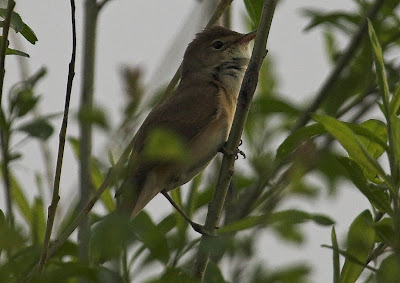 Reed Warbler
Shelduck 1 (initially on main lake but departed south to Fenlake at 7:45)
Mute Swans 7 (5 including the pair on the main lake and the pair on west Fingers, the west Fingers male has some fishing line around his left leg, looks like a loose loop at the moment )
Cuckoo Estimate at least 2 possibly 3. One, early on, flew across the main lake north to south calling. Another seen on 100 Acre flew north and little while later another? was heard calling along the Cut. I think these are the first Cuckoos of the year in the park unless DK has kept some secret! 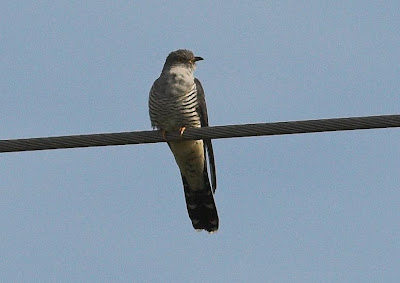 Cuckoo (on the wires over 100 Acre)
Garden Warbler 2
Blackcap 16 (includes a pair along the Woodland Walk)
Redshank 3 (Fenlake)
Kingfisher 1 (river behind Leat Pool)
Black-Tailed Godwit 3 (Fenlake)
Lapwing (2 displaying over Fenlake)
Sedge Warbler c.10 (includes c.4 along the Fenlake side of the river) 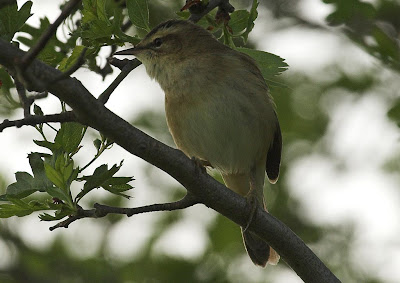 Sedge Warbler
Great Crested Grebe 7 (Only saw 1 on west Fingers, still on the nest. A pair on the main lake did a tentative weed dance.)
Mallard, the female with the 5 ducklings was on the north side of the main lake. She is very dark, hence the suggestion she is a X in yesterdays report)
Reed Bunting 2m (along the Spit) 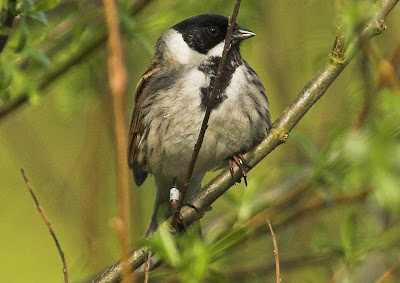 Reed Bunting
Gadwall 4min, 6max (Pair seen on West Fingers but later 2 pairs seen on the main lake, one pair departed and looked like they dropped into Fingers)
Coot 1
Lesser Whitethroat 2 (1 moving from the Rough to the Sheep Pen, another along the cycle track by the STW)
Common Whitethroat 2 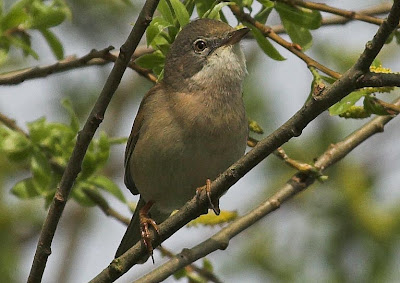