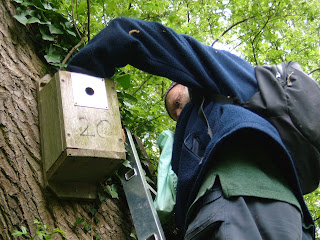 We have now completed checking the 28 tit boxes, all of which were occupied; there was an even split of 14 broods of Blue Tit and 14 of Great Tit.

The Blue Tits were, as a whole, one week ahead of their larger cousins this year. It is more normal for the larger tit to breed ahead of the smaller Blue Tit, but we suspect that the Blues are set in their ways (according to day-length), while the Great Tits move their laying date (according to the spring season's temperature). However, this spring is generally considered to have started 4 weeks later than in recent years.
Posted by Unknown at 5/23/2010 07:59:00 pm No comments: