It was a mammal morning with Mink, Fox and Stoat all seen on a quick walk around the park. The Mink was spotted from Kramer hide having just raided a Coot nest I think. The resident pair of Coots were going mad but I couldn't see what was going on as their nest is hidden by reeds. The Mink was spotted heading towards the island on the left of the hide, coming from the direction of the Coots. It had something in its mouth, which was probably a Coot chick.

The Fox was on Kingsmead, almost hidden in the long grass. It was getting a hard time from a group of Crows, one of which carried a stick over towards the Fox and dropped it close to it! I have read and seen Crows using tools and dropping snails and the like from a height onto hard surfaces to break them open, but weapons!

The Stoat shot across the path in front of me as I walked along the north side of Fingers towards the Rough.

Very windy again this morning but all the regulars were about, Cettis Warbler and Cuckoo both heard. At the STW reed bed a very agitated Wren was standing guard over a tiny fledgling. Reed and Sedge Warbler heard here also. Good views of a singing Sedge Warbler were had on the south side of the main lake where it perched in a small Willow between a couple of the fishing swims. A single Sand Martin was seen, earlier, along the navigation channel. Still plenty of family parties of Tits around the park, given away by there calling youngsters.
Posted by David at 5/26/2011 11:27:00 am No comments:

Sunday 22nd May: 26 birds of 9 species (retraps in brackets)

Very breezy on Sunday morning for the guided walk, for which we had 4 people. The wind made it tricky for birding as the birds tend tuck themselves away in the cover, still we had all the usual species either heard or seen. Unfortunately the Slavonian Grebe from yesterday had gone so no star bird to show the group. Ed and team were ringing in the Rough again so we dropped in there for a quick demo, seeing Garden Warbler, female Blackcap and Great Tit in hand. A female Cuckoo was heard a couple of times, some where close by, while we watched the ringers. The male was also singing around the edge of the Rough.

At the Spit we watched the young Coots and had glimpses of at least one Great-crested Grebe chick. The Cettis Warbler was also heard.

Around the park many of the Spindle trees are covered in web. This is not a spider invasion but instead the work of the Spindle Ermine moth Caterpillar. You will note that many of the trees covered in web are missing most of their leaves as the caterpillars have eaten them all. Looking closer you may see long threads hanging from the trees and possibly groups of caterpillars heading down the threads as they depart a stripped tree in search of another food source.

Next stop on the tour was Meadow Lane on search of the Nightingale that has been there for a few weeks but unfortunately the windy conditions put paid to any chance of finding it. We did have good views of Sedge Warbler in the adjoining field though and singing Whitethroat, Blackcap and Garden Warbler.

Then it was back to the car park via a walk alongside the Cut on Riverside. A family of Mute Swans with 8 youngsters were on the flood channel. 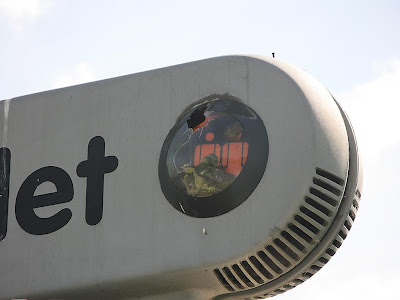 In the car park we checked out the automatic toilet, a strange choice for a birding walk you may think, but the fledgling Blue Tits, photographed yesterday, had gone. All those lovely nest boxes around the park and they choose the toilet!!

Next walk is Sunday 26th June at 8am. Yes that is correct 8am not the usual 9am, we are running the summer walks an hour earlier as it usually goes a bit quiet by the time the walk starts otherwise. See you there.