Muster at 5am. Proceed to Spit. Erect 3 nets at western end. Coffee.
Todays tally - 2 m.Chiffs (new), pr LTT, 4x Gt. Tits (3 x 2CY, 3 x females), 3 Wrens, 2 Dunnocks (pr?), 1 m.Blackbird (from Oct.05), 1 f.Bullfinch, 1 m.Reed Bunting.
Packed in at 8am - wind becoming excessive.
At 5am, the Jackdaws were still in roost, although some of them were moving about. 15 minutes later, they all took off over the main lake in a tremendous hoo-haa. The sun was very bright early on and the Kingfisher came roaring over, doing circuits of the Fingers, shouting its head off to anybody who cared to listen. Fantastic to see. David & John sauntered past just before 8; whilst passing the time of day, a Water Rail shot from one side of the spit to the other. The Greenfinches woke up as we took the nets down.
We must be daft getting up this early. [More to come from beginning of May for 4 months!]
Posted by Unknown at 3/29/2008 08:36:00 pm No comments:

A bright start this morning with sun and blue sky, however the wind increased during the morning and the cloud was rolling in by the time I left, mid morning. On arrival two Oyster Catchers flew in over the visitor centre and touched down on the main lake island for a while before leaving south east. They were seen again, later, heading down the navigation channel. There was also a Chiffchaff singing in the car park.

At Kramer hide very little activity. A Reed Bunting was singing from the trees in front of the hide and the usual Chiff was singing over towards the Sedgewick seat. Another Chiff was feeding in the tree to the left of the hide. The Green Woodpecker was hammering away on the nest box again. A second was calling from over toward the Sheep Pen and a third was heard from across Kingsmead. A Chiff was heard singing behind the hide, but could have been the one seen earlier. Five Sand Martin arrived and buzzed around over the lake for a while. A Great Crested Grebe came in and was followed shorly after by 6 Canada Geese and a couple of pairs of Mallard. A Pheasant called from the Spit. The island to the left of the hide seems the place for nests with a pair of Blackbirds and a pair of Long Tailed Tits taking nest material into the cover on there. A pair of Gadwall came in from west Fingers and a Little Grebe was also seen.

A Mallard looks to have nested in the base of the tree, front left of the reed bed in front of the hide. It saw off a Crow which went in to check it out. However a bit later the Mallard left the nest and the Crow seized the moment and went straight back in. Looked like it might have found something in there but was soon chased off by the returning Mallard.

Left the hide and headed back up the navigation channel, where there was a pair of Mute Swans, before walking around Fingers. The resident Mute Swans were on east Fingers along with a Great Crested Grebe, which may have been the one seen from the hide. Along the Spit a pair of Greenfinch were seen and on west Fingers a single male Shoveler and three pairs of Canada Geese. Heading back along the Spit a male Reed Bunting flew from the spit to the west Fingers reed beds nearest the main path.

On the main lake there were at least six Great Crested Grebe and a Male Shoveler. Turned off the main path at the Steps and continued up towards the Dead Seat. The usual Robin was on his corner. 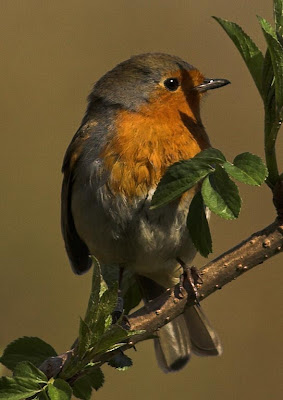 Robin
A Chiffchaff was singing in the trees by west Fingers backed by the calls of a single Greenfinch and half a dozen Goldfinch. A Great Spotted Woodpecker was on the peanut feeder in the Rough along with a couple of Great Tits. A fix watched from the far side of the Rough before disappearing into the thicker cover. In the coppiced area next to the Sheep Pen more Gold and Green Finches called. 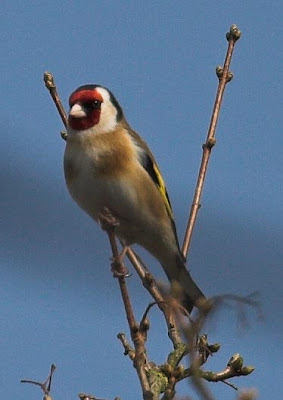 At the Willows by the Sedgewick Seat a Treecreeper was feeding and the usual Chiffchaff was singing, the same bird as heard from Kramer hide. Up at the Kissing gate another Chiffchaff was singing in the Long Hedge and yet another singing further along the Cut, on the way back to the main entrance.

Back at the car park the Chiff was still singing strongly.

While Ed was walking to work, having dropped his bike off at Priory Cycles, he spotted TWO OTTERS between the Aspects bridge and Aspects weir. This would be about 09:10 this morning. They were possibly coupled or playing together, one found something to eat while the other drifted off d/s, to be joined later by the second. Bet the Barbel loved it!! (LoL)
Posted by Unknown at 3/28/2008 11:10:00 am No comments:

Nice and sunny; too wet underfoot to go ringing (to get to where I wanted).
Quick look up the Spit - Teal m, Shoveler m, Gadwall pr, GC Grebe pr (male very noisy!), Tufted 2m, swans pr, Canadas - 4pr. The water level is too high for the latter to build a rudimentary nest, let alone lay a clutch, even though they seem in the mood to do so. Still, the Rangers thought they'd go and have a look anyway. Agitated Water Rail sounding off near bottom of the steps. Pair of Reed Bunts to-ing & fro-ing in reeds.
Stood at the edge of the New Meadow and watched a pair of Bullfinches delicately strip the buds (the female took the flowers, too) from a Blackthorn stem. When done, they then sun-bathed for c.10 mins before moving to another branch tip. Behind them were a pair of LTTs, the male following his bride backwards and forwards as she collected the raw materials for their nuptial home.
Behind me, towards the Rough gate, were another pair of Bullies in a Cherry tree. The Chaffinches were singing and moving around a lot. Then, a new song from down the Long Hedge, returned by a more forceful rendition from a rival just in front of me. Two Blackcaps! The local Wren joined in, and the nearest BC kept up his song until the other one moved off towards the Sedgewick seat or the Kramer willows.
Various tits were checking that nobody else was laying claim to their favoured box - or were these birds sneaking a crafty look at their neighbours real estate?
My next job is to get the Atlas cards out to everybody in my 10km square.
Might try ringing the Spit early on Sat - if it's not raining - so be aware.
Posted by Unknown at 3/27/2008 01:07:00 pm No comments:

And the madness finally pays off...

Another cold morning and after a bright start the cloud came in and down came the snow again. From the car park I headed down the main path towards Fingers. There were a large number of Blackbirds feeding on the meadow, around the Labyrinth, with about 7 Redwing mixed in. 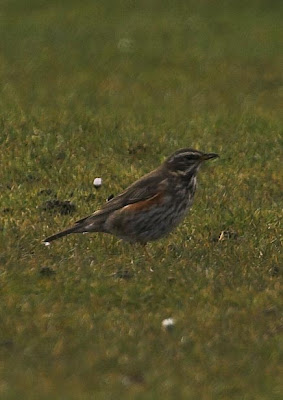 At Kramer hide it was very quiet although plenty of Chiffchaff activity with the usual bird singing over at the Long Hedge and at least one bird moving around the hide and across to the trees on the reed bed in front of the hide. DK dropped by and reported 42 Sand Martin roosting in the reeds on west Fingers. Shortly after a few were seen in front of the hide including one with no tail. Not sure what they were finding to eat but they seemed to be catching something very low over the water. Given the low temperature I doubt there were many flies about. As the snow started falling a Muntjac came into view on the right side and took a drink. It hung around for a while eating the leaves from the lower branches of the trees along the spit opposite the hide. At least 3 Little Grebe were present along with 3 Canada Geese, a Greylag Goose, a couple of male Mallards and 2 Heron.

I left the hide and decided to head back around to the Spit to see if the Sand Martins were still in the reeds. This proved to be a good move because as I reached east Fingers I noticed a movement out of the corner of my eye. I turned expecting to see a Little Grebe and was delighted to see an Otter swimming across to the scrub at the north end of the lake, just it's head above the water. 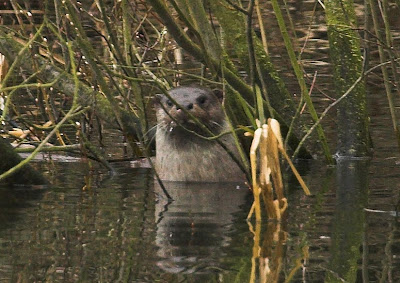 After the Otter disappeared a couple of Little Grebe appeared and moved through the reedbed to Kramer. Also on east Fingers was a male Tufted Duck and a Great Crested Grebe. A number of Sand Martins were flying about over the lake. Round at the Spit half a dozen Greenfinch were in the trees near the main path. A scan of the reeds in west Fingers didn't reveal any Sand Martins although a male and two female Reed Buntings were present. It seemed like all the Sand Martins had taken to the air, flying about over both west and east Fingers. Also on west Fingers was another Great Crested Grebe, 5 Teal (2 Pair), a single male Shoveler and several pairs of Canada Geese.

Continuing round Fingers I went down the steps where a Chiffchaff was singing. I noticed another Chiff low down by the water and possibly a third further along the path by the Dead Seat. By the time I reached the Dead Seat the 2 Great Crested Grebe were together and displaying. The feeders in the rough were quite busy with Great and Blue tits.

I continued round to the Sedgewick Seat where the usual Chiff was singing strongly. There was little else of note as I carried on round passed the Sheep Pen. I reached the back entrance to Fingers and a couple of male Bullfinch flew across to the plantation opposite, joining a female. 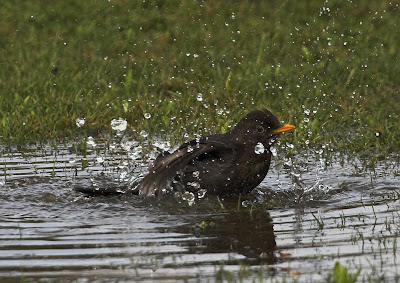 On the way back across the meadows I came across this Blackbird bathing. Rather him than me, brrrrrrr!