Bird of the day

Star bird for the day: Lesser Redpoll. This bird was originally ringed at an, as yet, unknown location:
. 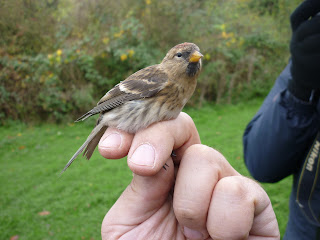 Ringing totals for today consisted of 52 new birds, 10 retraps and 1 control (i.e. originally ringed elsewhere) of 14 speceies. The species totals are as follows (retraps in brackets):

The only other ringing records for Lesser Redpoll are nine in 2005 and one in 2007 (all new), hence the star status of the bird pictured above!


The forecast rain held off for the guided walk this morning and we had quite a successful morning. EG was ringing in the Rough so I checked in with him before the walk started. It had been quite slow with just one bird ringed to that point but the next round returned 9 birds including a bit of a star. I hurried off to meet the group for the walk and sent them down to the Rough so they could see as many of the birds as possible.

There were a good variety of birds in this haul including Goldcrest and of course the star bird, a Lesser Redpoll! Even better news was that it was carrying a ring from elsewhere.

The group got to see all of the birds at close quarters, including the Goldcrests of which there was a male and 2 females so we got to see the difference in the colour of the crest. The male has red/orange in the yellow crest but this is not easily seen unless the crest is raised in display, or the ringer does it for you!

The next net round was less productive but a couple of Wrens gave us a chance to compare and contrast Britain's 2 smallest birds. The 'crests were around the 5g mark but the Wrens were around double the weight. However the wing length was slightly longer in favour of the 'crests! The wing length is often an indicator of the distance a bird might travel (i.e migration). Here we have Wren's which do not tend to move particularly far and the Goldcrest, with the longer wing length, which migrates short distances (many come across from the continent to spend the winter here).

With the Wren's processed we left EG in peace and had a look around Fingers where there were a few Gadwall and Teal showing well on West Fingers. Having moved around to the Spit we also found 3 Little Grebe on West Fingers. There was little else of note although a small party of Siskins were heard and then spotted flying towards the Crescent. We followed but failed to find them.

We left Fingers for a loop of the main lake, taking in the Canoe Slalom on the way. There were no Grey Wagtails along the Canoe Slalom but we did have a party of Redwings over (West) as we passed the Barns Hotel. Back to the main lake and we had a few Tufted Ducks close to shore in the south east corner. We were unable to locate the Goldeneye seen earlier from the north side so we continued along the south side hoping to pick it up further along. A large party of 50 Fieldfares passed over west.

A scan of the south side from just past the hide still failed to find the Goldeneye although there were 3 Common Gulls in with the Black-headed Gulls. There was little else further along the south side so we retraced our steps back east in the hope of finding the Goldeneye. Checking each fishing swim as we went we were lucky enough to see a Kingfisher zip past, a flash of electric blue. Around the east side I finally spotted the Goldeneye which was still feeding, making viewing difficult as it kept diving just as I got the scope on it. Most managed to get a good look at the bird.

We continued around the lake and back along the main path finishing at the visitor centre. A very successful morning and we all remained dry throughout!

The next walk is Sunday 25th November at 9am, meet outside the visitor centre.

DK kindly provided the following counts from his morning circuit of the park: