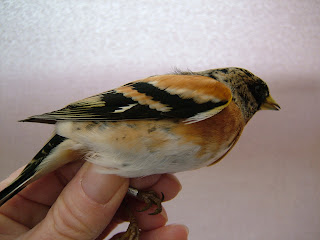 Back from the cold of Norway to a beautiful early spring morning. A slight frost on the ground but clear sky and warming up quickly. I followed the main path, heading down to Kramer hide. 14 Greylag Geese flew in from the south and circled the main lake several times as they lost height, finally continued on their way north. Over Kingsmead a Crow was harrassing a Sparrowhawk which turned the tables and ended up chasing the Crow. At the hide not much about initially, at least one male Sparrowhawk in the trees across from the hide. One was mobbed by four Crows and two Magpies and flew off north.

The appearance of an Otter was signalled by a Moorhen flying up from the water to the top of a bush and a Little Grebe hurtling through from the channel to east Fingers. Shortly after the Otter appeared in the same channel and swam along behind the fallen tree towards the gap to west Fingers. It climbed over the base of the leaning tree, paused for a moment before dropping down the other side. It reappeared as it swam through the gap to west Fingers and dived before heading off to the right underwater.

The Moorhen and Little Grebe settled down after the Otter left and a Great Crested Grebe (winter plumage) came through from west Fingers and settled down for snooze. Three Gadwall (2f) and a pair of Shoveller were also seen. Three Heron came in to roost.

I left the hide and headed back towards the crescent in the hope that the Siskin would be in the Alders. There were a pair of Mute Swans on east Fingers. There was a dead Swan (juvenile) by the little wooden bridge into the Crescent, off the main path. Looked like a Fox had got it. The Siskin were AWOL but a male Bullfinch made up for that and it was joined by a female as it moved up towards the spit.

From the spit there five Shoveller on west Fingers and a Reed Bunting singing from the crescent reedbed. A pair of Great Crested Grebe (summer plumage) on west Fingers along with two Little Grebe and a Coot. A drumming Great Spotted Woodpecker over by the dead seat. Round by the steps there was a Kingfisher along the first finger.

As I headed around the conservation area I had reports of Jay on the area of the Sedgewick seat but I didn't catchup with it. There were 34 Canada Geese on Kingsmead with 4 Pheasants and 6 Moorhen.

Back at the main lake there were still good numbers of Pochard over the far side by the hide. There were at least 14 Cormorant and 28 Mute Swans.

It was 9 degrees centigrade by the time I left a rise of 7 degrees in about 2.5 hours. What a great morning, loads of singing birds including Song Thrush, Dunnock, Great Tit, Chaffinch and Wren.
Posted by David at 2/09/2008 03:37:00 pm No comments:

A spring like day! Went and filled the peanut feeders in prep for tomorrows net session. I wonder what we'll catch if it's as bright as this tomorrow???
Heard a snatch of Willow Warbler song (so I thought) between the Sedgewick seat and the concrete bridge. Further along the Long Hedge, I came across a Phyllosc calling; it had pale legs, no lower eyering and was decidedly "long". It looked just like an autumn Willlow to me. I followed it for a bit but it shot off towards the Navigation upstream of the old railway bridge. However, on my way back, I heard it calling again but I couldn't find it. There was a Chiff SINGING from near the Kramer Hide - so I gave up/in.
On Fingers - 10 L.Grebe, 1 pr GC Grebe, 3 male Shoveler, 2 pr Gadwall, 2 pr Teal & 3 Immature Herons. Moorhens in abundance. 2 Song Thrushes singing merrily away in conservation zone, plus Robins, Dunnocks, Wrens but no Blackbirds.
Posted by Unknown at 2/08/2008 02:26:00 pm No comments: 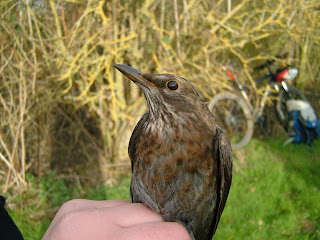 2CY female Blackbird, wing 134mm
Decided to have a morning's ringing in the Sheep Pen plantation. Was bright and sunny but the wind started to get up as the morning wore on. Had to re-arrange the vegetation in places to get the nets in. Target = winter migrants.
6 LTTs were retrapped in 2 groups of 3 - a pair + helper. The 2nd lot included birds from Sept & Oct 2003! A fem. Robin did not have a BP, unlike the one last week. Did manage to trap 5 Blackbirds, 4 of which were big enough to be continentals. They also have more ogcs than our native birds and often weigh 10 gms more, too. 9 of the 11 caught here this month look like "johnny foreigners". Weather permitting, we'll have another go elsewhere next weekend.
Posted by Unknown at 2/03/2008 06:22:00 pm No comments: