Before the guided walk got underway I had a Brambling in the Alders by the Crescent. It hung around until just before 9am when it was chased off by a female Chaffinch and I was unable to relocate it. I also had a Shelduck over north earlier. 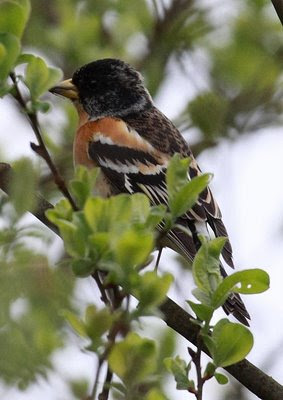 Brambling at the Crescent

I joined the guided walk and had an enjoyable morning helping EN point out spring migrants to some enthusiastic newbies and the regulars. We started with a quick stop at the bottom of the Steps for singing Blackcap, Chiffchaff and the regular tits and finches. Then it was down to the Crescent in the hope that the Brambling had returned but sadly not. Along the Spit a Jay was seen in the Willows on the west side of the Fingers, it/another was seen later heading out over Kingsmead. However singing Sedge and Reed Warbler in and around the Crescent made up for that. There were plenty of Swallows and Martins around and a group of 9 Swallows were perched in one of the trees on the south east corner of the Finger lakes. The Common Whitethroat was showing well on the same corner. Up at Kramer hide a Treecreeper was heard and then it was down to the STW reed bed where we had 3 singing Sedge Warblers. At the first pool on 100 Acre there was a Lapwing and at least 4 Tufted Ducks on the larger pit seen at distance.

We walked back along the Woodland Walk and at the north end we had Willow Warbler and 3 Blackcaps while at the southern end Bullfinch was heard high in the Blossom clad trees. Good views of Chiffchaff and Blackcap were had back at the Rough. At the Deat Seat good views were had of Gadwall (2 males, 1 particularly smart) and a pair of Teal, the male Mute Swan was having some time off from worrying Canada Geese while the female was house keeping at the nest site. Back at the main lake all the Martins and Swallows had gone (11:30). A couple of Common Terns remained. And that was it, shame the Brambling didn't stick around but a good return on species anyway and the sun made it out by the end to warm us up! 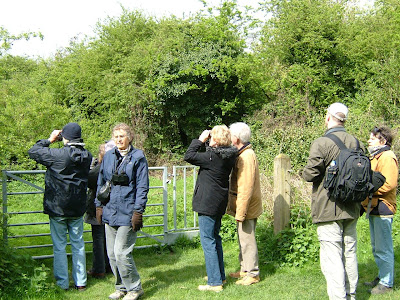 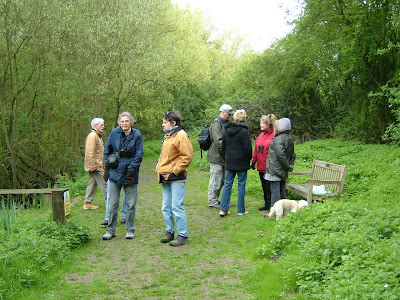 Email ThisBlogThis!Share to TwitterShare to FacebookShare to Pinterest
Labels: Brambling