Very quiet morning on the bird front, not so much on the weather front. Very strong winds with white horses on the main lake. On the way to Kramer hide 2 Shelduck flew over heading south, struggling with the gusty wind. At the hide a pair of Little Grebe were working their way around the lake. A single Shoveler made several visits, tagging along with a couple of Mallard. 3 Canada Geese passed through as did the resident Mute Swans. At least 3 pairs of Moorhen were also about.

A Great Spotted Woodpecker started hammering on something just before I left the hide, couldn't locate it but it was somewhere near the Sedgewick seat. Sounded like it was hammering on a nest box, very hollow, but I hope it wasn't one of the new ones we put up on Thursday! A puffed up Mute Swan cruised down the navigation channel, couldn't see a ring. There were several pairs of Bullfinch in the Long Hedge and at the Rough.

From the Spit there were another 3 Little Grebe, 3 Coot, a young Heron and the pair of Great Crested Grebes. The GCG's engaged in a bit of display and I had hopes of seeing the weed dance but nothing materialised.

Back at the main lake you could have surfed at the beach! Mute Swan numbers were way down with only 10 counted. There were at least 27 Pochard probably more tucked in tight under the island for shelter. There were 16 Cormorants at the sailing club, chilling out. As I said at the start, a very quiet morning.
Posted by David at 3/01/2008 03:37:00 pm No comments:

It turned out to be a long day in the park with an 7am start at Kramer hide. It was quite cold early on but the appearance of the sun soon warmed things up. It was very quiet with little of note seen. A pair of Little Grebe, in front of the hide, were quite mobile, working most of the water in front of the hide, during the morning. One came very close to the hide early on: 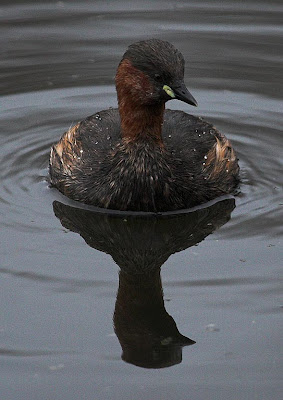 I met EN at 09:30 for a session putting up new nest boxes for Blue and Great Tits. These were placed in the Rough, the Sheep Pen and along the new woodland walk. We also fixed a couple of boxes that were already in the area of the woodland walk. These had been "opened up" by Woodpeckers and now have shiney metal plates to deter them in future. Despite all the people working on the new woodland walk a Fox took the time to wander past. While looking around the small plantation next to the Sheep Pen we heard a Chiffchaff singing which sounded like it was somewhere in the Sheep Pen. 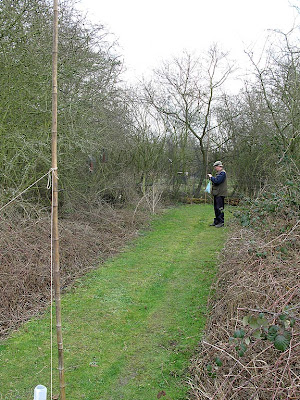 The first catch of the day

After a cup of tea we headed down to the rough to do some ringing. The highlight was a Great Spotted Woodpecker that will forever be known as the "Vampirepecker" after its assault on EN's finger. 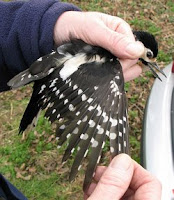 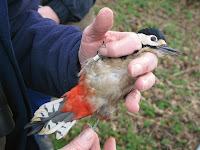 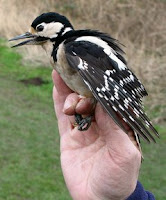 Fine morning! Walked "her dogs". 45 Pochard being outstripped by the 26 swans; most of the latter are 2CY or 3CY. Also 2 Gadwall and 2 Shoveler on the main lake. A gathering of BH Gulls probably numbered 300. Siskins were heard but not seen - were they good-mannered young ones? Fingers is so full of water that not alot cares to stake it out at the moment - except for THOSE geese, fighting for their little bit of real estate! 2 Coot, 3 GC Grebe, 2 Teal, 2 more Shoveler & 4 little dabchicks. A young (2CY) heron huddled in a corner.
The best bit - the male Sparr, showing its brick red breast, flew by and later auditioned for that ride at Alton Towers that goes straight up, hesitates, and then comes hurtling straight back down to ground level before braking. Still, keeps it away from the many sighing Bullfinches we heard!
Posted by Unknown at 2/25/2008 04:55:00 pm No comments: