A scouting mission before the guided walk tomorrow morning and a cold start too. Scraped the frost off my car before I set off! Fantastic clear blue sky, what a difference it makes with no planes flying at the moment, no sign of the ash cloud either.

First up was a single Common Tern over the main lake, my first this year. A Willow Warbler was singing behind the Visitor Centre and a Blackcap was singing in the car park. Several pairs of Great Crested Grebes displaying to each other on the main lake, no sign of the pair on Fingers today, the nest site looked deserted, still they always seem to take several attempts to get it right. 2 male Gadwall and 3 Tufted Ducks (1f) on Fingers with Blackcap singing at the end of the Spit. The two pairs of Mute Swans were both on their nests, 1 on Fingers and one on the main lake island, on the main lake the resident male had his hands full trying to clear out invaders, giving up in the end and settling for an exclusion zone around the island. DK had a Sedge Warbler along the edge of the main lake just as he reached Fingers along the main path. JA joined us by the Crescent and DK departed taking the opposite route around Fingers.

Plenty of Blackcaps around the park with odd Chiffies and Willow Warblers also. At the STW reed bed we heard our first Sedge Warblers of the year but only managed fleeting glimpses as they darted in and out of the reeds. We took the cycle track out towards Willington checking out each of the lakes. A couple of Mallards with a single duckling on the first, small, pool. On the large lake on 100 Acre a Redshank was heard and few Tufteds were seen. At Meadow Lane GP we flushed a Snipe and Little Grebe was in residence. Plenty of Skylarks in the fields either side of the bypass. On the Tern Pool there were at least 10 Tufted Ducks. No sign of any Yellow Wagtails but plenty of great view of the skylarks including one just a few metres away along the track.

Heading back there were several Lapwings displaying over the fields and a couple of Stock Doves feeding in the ploughed field opposite the Tern Pool. A Willow Warbler was singing in the Trees as we reached Meadow Lane GP again. Minimum of 14 Sand Martins over the STW. Back at the STW Reed Bed and we finally got good views of a singing Sedge Warbler along the edge of the Navigation Channel, brilliant.

Along the Woodland Walk Bullfinch was heard along with ticking Blackcap and singing Chiffy. Heading into the Fingers complex both Green and Great Spotted Woodpeckers flew from the large Willows on the right. JA spotted a Common Buzzard gliding north west over Riverside. EN and EG were in the Sheep Pen. On our way towards the Steps we spotted a Bat Box that has seen some Woodpecker attention, probably the one we had heard earlier. We thought it was on a nest box judging by the hollow sound but DK mentioned they had been on the bat boxes.

No sign of Grey Wagtails along the Canoe Slalom, probably too late. At Fenlake JA thought he'd heard a Grasshopper Warbler but it was just a distant Sedge Warbler, no less welcome though. There were at least 4 Teal on Fenlake and Kestrel was spotted hunting over the back of the lake.

Little else of note on the rest of the circuit but the Willow Warbler was still singing by the VC when we reached the car park. Another very enjoyable morning, lets hope it's just as good tomorrow.
Posted by David at 4/17/2010 05:28:00 pm No comments: 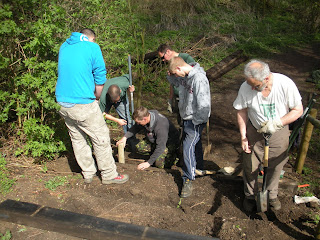 A beautiful balmy April Sunday saw our baker's dozen of volunteers do a variety of tasks to help improve the park.


One group replaced the wooden steps down into the Fingers Conservation zone, not only removing the old sets but also an even earlier set found buried under those. The pictures show the task in progress and the team taking a well deserved break on the newly replaced steps.


With seven of our volunteers on the step team another four were off dead hedging (a fence woven from branches and twigs) around a wooded area opposite the Labyrinth where a natural play area is being created over the coming months. The hedge establishes the play area's boundaries and will help avoid problems with dog fouling. Dave B. one of our volunteers and keen birder particularly appreciated the songbirds serenading the team as they worked. 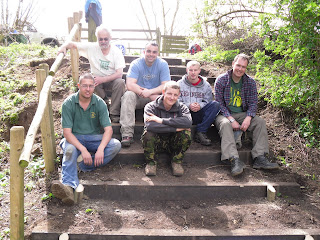 Yet another group of three volunteers helped to replace a fencepost and wiring to repair a fence which prevents access to parts of the Fingers Conservation area which is a haven for wildlife away from the public. The photo shows Robert and Mo hard at work putting the new fencepost in place. A good dead hedge of the last bits of willow coppiced in the previous task made the fence even more impenetrable. 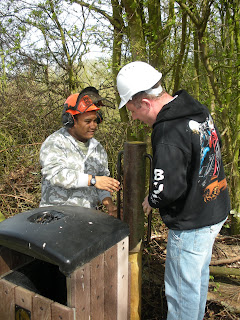 Another team started work to help control wave erosion by the beach, which the Rangers finished later in the week by willow spiling (a woven willow fence at the lake edge, using willow coppiced in the last task).

It's that time of the month again and the sun shone on the volunteer group. This month the main task was the replacement of the steps down to the Finger Lakes conservation zone, however a great turnout of volunteers meant we were able crack on with several other tasks. I joined a group doing some dead hedging in the area opposite the labyrinth. This will become a natural play area for children so the dead hedging is required to keep out dogs and the associated mess. Meanwhile the main group got busy on the steps and another group replaced the fence at the end of the Spit.

It was great working in the plantation being serenaded by a Blackcap which seemed to be doing a circuit of the area. Chaffinch, Robin and Wren were also in the area.

Lunch quickly arrived and the Steps team had done a great job almost completing the task. After lunch my group headed down to the Beach to begin shoring up the bank at the flood channel. We got started on the task by driving in some half round posts along the edge of the bank to prevent any further erosion.

A Cormorant had me grabbing for my bins as it did it's very best Great Northern Diver impression but sadly not.

We packed up a little earlier than expected having run out of materials but at least we'd made a start.

Earlier, on arrival, I had Willow Warbler, Chiffchaff and Blackcap singing at the car park. There was also a mixed flock of Swallows and Sand Martins over the main lake.
Posted by David at 4/11/2010 02:30:00 pm No comments: