On arrival there were a pair of Bullfinches in the car park and singing Blackcap and Willow Warbler. I headed off by the main lake, towards the finger lakes. There was a Sedge Warbler singing at the edge of the lake just opposite the visitor centre and a pair of Tufted ducks over by the island. Further along, opposite the finger lakes, several Reed Warblers could be heard in the reed bed although not as vocal as when I last visited a couple of weeks ago.

Errol was down by the crescent reed bed doing some ringing. As I arrived he was just taking down details of a male Reed Bunting.

After a brief chat I headed off around the finger lakes. A red-eared terrapin was sunbathing at the fallen Willow in west fingers. A Kingfisher was heard along the spit. A Cuckoo was calling from some where near the dead seat and there was a Moorhen with chick along the first finger as seen from the dead seat. A Chiffchaff was singing in the same area and another was singing further round towards the Sedgewick seat.

There were still several Blackcaps singing around the finger lakes and a couple of Common Whitethroats were heard also.

There was very little happening at Kramer hide, the vegetation is very dense now so it is very difficult to see anything but there were some singing Reed Warblers in the left hand reed bed. 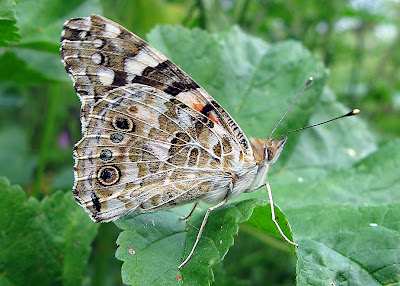 No sign of the Great Spotted Woodpeckers around the nest so they must have fledged since my last visit. A family of Canada Geese with 5 goslings were on the grass by the canoe slalom. 3 Grey Wagtails were feeding in the canoe slalom, at least one of which was a juvenile.

Little of note opposite the Barns hotel but after crossing the Marina Meadow footbridge there was a female Bullfinch along the leat. Sadly the main lake hide has been vandalised again, the shelf under the right hand window having been ripped out and dumped in the lake.

Not much of note until I got to the river behind the leat pool where a Greylag family with 2 goslings were heading upstream. But while watching them I heard a Grasshopper Warbler Reeling in the reed bed on the far bank of the river, the first time for several weeks.

As I continued around the main lake towards the south west corner the Greylag family appeared out of the undergrowth, having cut across from the river, and headed down onto the lake. A quick count of the Canada Geese came to 83 and there was another adult Greylag with one of the groups of Canada's.

Nothing else of note although the Sedge Warbler near the visitor centre was still singing strongly as I arrived back at that point.

Watch out for the mosquitoes around the finger lakes. Long sleeves or copious fly repellent are the order of the day!
Posted by David at 6/09/2007 09:57:00 am No comments: