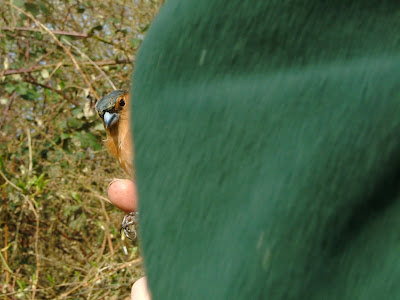 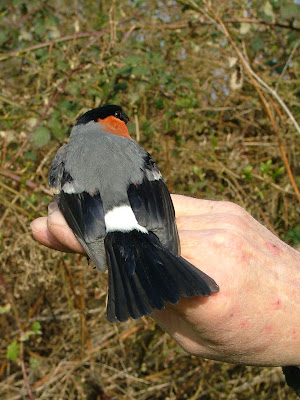 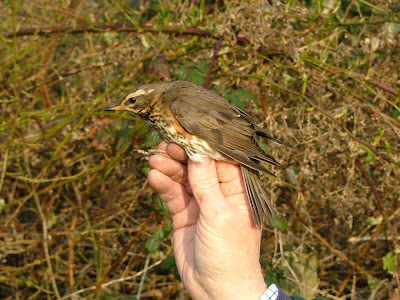 Above: The surprise redwing

A very good morning started with 9 Sand Martin over the main lake and 3 singing Chiffchaff (Rough, Crescent and opposite the Beach). There were six Tufted Ducks on the main lake (1f), they were seen in flight later and then on East Fingers with a seventh on West Fingers. Also on West Fingers there were at least 3 Little Grebe, a pair of Teal on Kramer and from the hide LTT looked to be nest building in the hedge over to the left. Two Great Crested Grebe spent the morning chasing around Fingers, not sure whether they were a pair or rivals!

Met DK along the navigation channel and he tipped us off about the waders and Shelduck on 100 Acre. We checked the lakes out and, after an initial blank on the first (smaller), were rewarded with Redshank (at least 7), Lapwing, Green Sandpiper (2) and flyover Ringed Plovers (possibly LRP) with a Common Sandpiper. Close your eyes and you could have been at the coast on some mudflaps with the Redshank calling and singing, superb. 2 Shelduck flew over heading towards Priory but they must have doubled back as when we got back to the smaller lake there were 2 there along with several of the Redshank and Lapwings which remained mobile moving been the 2 lakes. Odd Sand Martins about also.

Back in the park we had another singing Chiffy along the Woodland Walk and then both Green and Great Spotted Woodpeckers in neighbouring Willows before we got to the Sedgewick Seat. Treecreepers were heard here too. EN was checking the nets in the Long Hedge while Ed snoozed by the car :-)

Bullfinch were about in the Rough along with all the regulars.

Back at the main lake 3 Shoveler were seen but little else. A Kingfisher was seen along the Leat and at Fenlake there are still a number of Teal (at least 12 today) and 2 Shelduck (possibly the same 2 seen earlier on 100 Acre?)

A good ringing session early this morning; frost at first, warm sunshine later!
32 birds caught of which 21 were new. Our first Blackcap, a male that was hatched in 2003 and as such is our oldest known. A surprise turned up in the shape of a Redwing, an adult female. There were 15 in the Park leaving a roost Thursday just gone. The best of the day must go to the Long-tailed Tits; we netted four pairs separately, where every male had a Priory ring on, but every female was assumed to be an incomer, since they were not ringed (they are now!).
In the past, when we were ringing at both Priory and South Mills, we used to get an exchange of LTTs between the two sites.
Totals - Wren 4, Dunnock 2, Blackbird 3, Redwing 1, LTT 8, Blue Tit 4, Great Tit 6, Blackcap 1, Bullfinch 2, Chaffinch 1.
Posted by Unknown at 3/21/2009 02:52:00 pm No comments:

BTCV, with funding from GreenPrints (Government and Sita Landfill Tax funded), took a group of 16 - 25 year olds from Autism Bedfordshire and were joined by other young people with Autism from Mark Rutherford & Samuel Whitbread Schools & their support.

In the W plantation (aka the woodland walk) these keen volunteers had a great time removing small trees from the woodland to let in more light, to help improve biodiversity and increase the amenity value of the area. 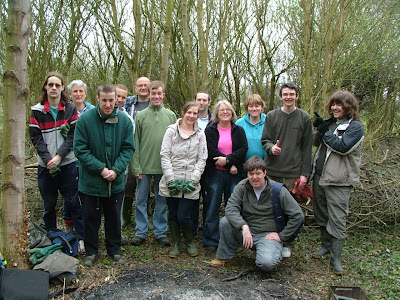 Thank you to everybody to who took part!

I took a quick walk around the park before I left. Nothing much of note except a male Reed Bunting alongside the main path in the Willow/Reeds and frogspawn in the fingers by the steps (along with many frogs seemingly enjoying this time of year!).
Posted by BTCV Ed at 3/18/2009 07:36:00 am No comments: