The number of Phyllosc's was not expected (all bar 1 were juvs); their weights were OK but they must be suffering from a lack of inverts with all the rain we've had. The forecast is for better - we'll see. Hopefully, they will then gain weight and put on enough fat to cross the Channel.

c.40 Barnacle Geese over SW early (07:00) was a pleasant surprise; also a few terns and a flock of H. Martins.

A young Moorhen that came out of the reed-bed and was following its 'mum' along the crescent was, an hour later, picked off by a pike as its 'mum' was feeding it out in the middle of "Fingers". Ah well.
Posted by Unknown at 9/10/2008 05:07:00 pm No comments:

With all the rain we've been having ... 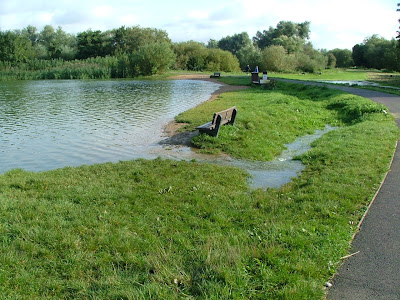 Above: High tide on the beach!!
Below: At least the willow is growing from the BTCV spiling! 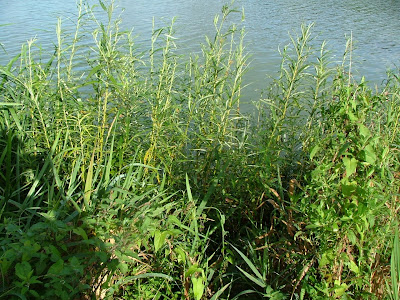 Still a handful of Common Terns on the main lake, all roosting up by the sailing club on arrival but seen over the main lake later on. No sign of Reed Warblers in the main path reed bed or the crescent. Fairly quiet along the Spit with a few "Willow Chaff" calls. (Still working on those!). On West Fingers a lot less Mallards but a female Shoveller put in an appearance and a pair of Gadwall flew as we arrived at the end fishing swim.

Much quieter around the Rough this week, not surprising given the conditions. We headed out to Meadow Lane GP, stopping to count the Herons on 100 Acre. 9 in total which were spooked by a rogue dog walker crossing the field. She also put up many of the Gulls that were on the new workings.

At Meadow Lane the water level has increased dramatically, no surprise there! A couple of Green Sands and a lone Little Egret were the highlights. The rain came down for the second time and we sheltered under the old bridge over the cycle path. A soggy DK joined us and when the rain eased we all continued back toward the park. TP passed us going the other way and mentioned a Snipe on the shallow pool on 100 Acre.

Back in the park we had a Hobby along the navigation channel and that was confirmed at Kramer hide when DK saw it flying over the trees opposite. Another heavy shower passed through so John and myself sat tight in the hide. DK was obviously made of sterner stuff and continued around the park. When the rain eased a party of Tits and Warblers circulated in the far left corner. These included Blue Tit, Great Tit and Long Tailed Tit along with Willow Warbler and Chiff Chaff which were singing this time to make the ID easier. Also with these was a Treecreeper and a Kingfisher joined the party. It sat for a while before doing a strange flat dive, seemingly plucking something from on or close to the surface of the water. Unfortunately it went behind some think cover so we couldn't see what it caught.

Fairly quiet for the rest of the walk as we headed back to the main path and then back to the car park. The Canoe Slalom was in use so no point in checking that out for Grey Wags.

Sunday dog walk - 8 Gadwall on Fingers (lilypads); also 12 Moorhen & a single Shoveler, joined later by 4 more. 2 Reed Warblers mumbling away along the spit. Lots (ca.8) Willow-Chiffs by the overflow pipe into Fingers. Nice to see the terns still frequenting the main lake along with ~25 Smarties, 1 or 2 House Martins and a few (3 that I counted) Swallows.
Posted by Unknown at 9/07/2008 01:11:00 pm No comments: