What a cold day! Went down about 11:00. Spotted two possible Shelduck on the far side of the lake, so decided to go to the main hide. When I got there, they were sitting on the bank by the hide with the Goosander. Had a count up - 27 Cormorant, 83 Pochard, 10 Tufted, 33 Shoveler (incl. those on Fingers). Stood by the gate for a while and clocked a fem. Gt.Spot, a fat Redwing, Siskin over, party of Lotti's and assorted regulars. Walked back to Fingers which turned out quiet. 4 Teal huddled together and 5 L.Grebe and a few Shoveler was about it. In/over the trees I heard/saw male Sparr, several Bullfinch and a handful of Goldies. Then another lone Siskin as I talked to the rangers. Back to the car passed c.8-9 Blackbirds and a Fieldfare.
Posted by Unknown at 1/04/2008 05:42:00 pm No comments:

Arrived early again today and was rewarded with a singing male Tawny Owl. The call came from the wooded area behind the beach but may have been across the other side of the flood channel. There was also a Kingfisher calling from the beach corner of the main lake.

At Kramer hide there were 3 Little Egret at Roost, they left at 07:35 before the bulk of the corvid roost which left around 07:45.

The video clip above shows some of the Crow and Jacdaw roost leaving this morning along with a short clip of the Kingfisher in the tree to the left of the hide.

While in the hide had a Pied Wagtail and Sparrowhawk (f) over. A pair of Shoveller, 3 Little Grebe, c.7 Moorhen and 2 Heron also put in appearances but Otters were absent again.

Around the back of Fingers heading to the Sedgewick seat there was a pair of Gadwall.

Dead Seat: Another pair of Shoveller, resident Mute Swans seeing off 6 Canada Geese, Kingfisher and a Great Crested Grebe with attendant Black Headed Gull trying to steal a breakfast fish. Also a Song Thrush singing in the Rough and a Great Spotted Woodpecker by the steps.

Another 3 Little Grebe on east Fingers along with another Great Crested Grebe, also with accompanying BH Gull. There were 13 Siskins in the Alders by around the crescent.

Heading around to the main lake hide had a Kingfisher in the south east corner.

By the south side fishing swims a Kingfisher flew past heading for the south west corner and the Goosander came out of the reeds by the fishing swims eating a fish. 19 Teal flew over heading towards Fingers where most looked to have dropped in. Another 2 Mute swans joined the other 2 pairs on the main lake for a short period before departing. There were 2 Kingfishers in the south west corner and another was heard in the marina.

A couple of singing Dunnock in the headge behind the sailing club and another in the north west corner.

Back at the car park 3 Mute Swans flew over south west.

Another early start but no Otters today. The Crow and Jackdaw roost left between 7:30 and 7:45. 4 Little Egret left from their roost, in front of Kramer hide, during the same period. Approx. 21 Teal flew in to Fingers. The maximum number of Shoveller seen was 5 and a Kingfisher came to the tree to the left of the hide again. 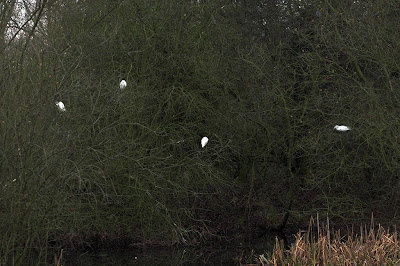 I surprised a Pheasant in the fenced off area when I came around the corner to the gate to the Rough.

Great Spotted Woodpecker and a male Bullfinch along the spit. 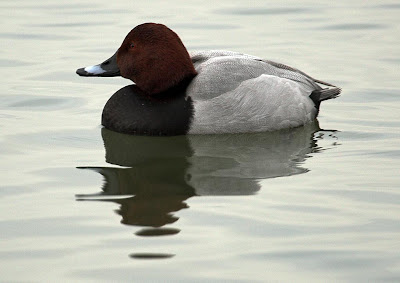 A great morning of mammals with Fox on the new meadow first thing as I headed across to Kramer hide, then great action by 2 Otters which rampaged through the reed beds and over the spit in a great game of chase before disappearing into the channel through to east Fingers. A little later a Muntjac appeared on the spit opposite the hide, grazing on the branches at the edge of the water. A pair of Gadwall and at least 3 different Shoveller put in appearances at various times during the morning. A Kingfisher came to the tree, left of the hide, again. 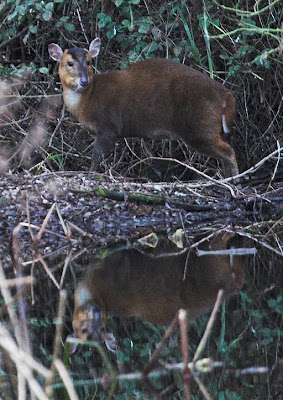 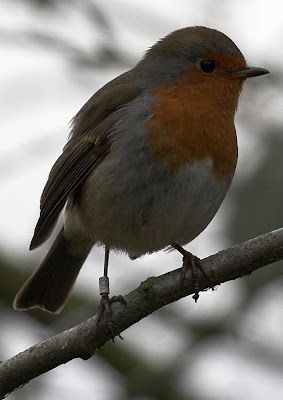 This ringed Robin was on the path between the dead seat and the steps
Main lake hide:
93 Pochard (9f)
17 Tufted Duck (3f)
12 Great Crested Grebe
21 Cormorant
42 Shoveller
44 Teal over, all bar 15 dropped into Fingers the other continued on north east.
The usual 2 pair of Mute Swan were joined by 5 that flew in from the east. A Kingfisher was calling in the south west corner of the lake.
Posted by David at 12/31/2007 03:25:00 pm 1 comment: