This weekend at the park

Two early starts this weekend, in the hope of catching up with the Otters again however that wasn't to be. On Sunday a Muntjac came down to the water to drink, in front of Kramer hide and there was some entertaining action from the Coots as territorial disputes were settled. The male and female Sparrowhawks were regular visitors to the nest on both days. 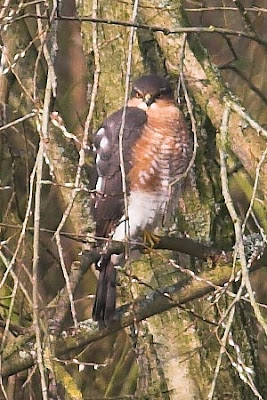 Blackcaps have started to arrive in the park with several singing arround the finger lakes. Chiffchaff numbers seem to have stabilised around the 10 mark at the moment. With the colder weather some wildfowl seems to have returned with upto 12 Shoveler, 7 Tufted and 4 Gadwall in the park. Several Kingfisher sightings were the highlight of Sunday which was very windy and quite overcast and cold early on.
Posted by David at 4/01/2007 02:32:00 pm No comments: