Highlight this morning was the four Common Buzzards circling overhead at Meadow Lane GP. Also on the GP were 14 Lapwing, 3 Redshank, a Kestrel and a Ringed Plover. In the field on the opposite side of the cycle track from the GP were 2 more Ringed Plovers and 4 more Lapwing. 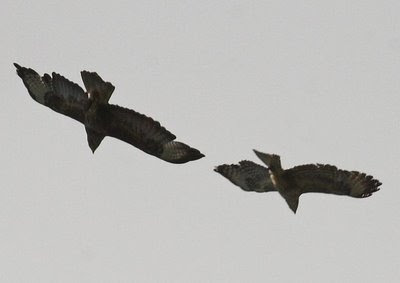 2 of the 4 Common Buzzards

At the main lake hide a Common Tern was very obliging in posing for a photograph. It had a metal ring on it's right leg (SX__643 the first number might be a 2). 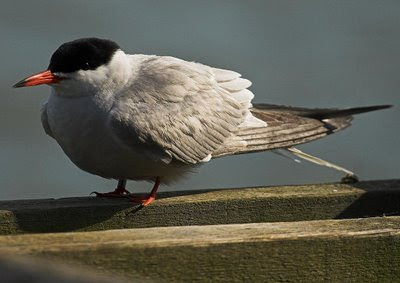 The pair of Cuckoos were around the Finger lakes again. There were only 6 cygnets with the pair of Mute Swans but both young Great Crested Grebes are still about with one of them looking very independent, they don't turn down a free meal from mum and dad though!

Along the cycle track up past Fishponds a Lesser Whitethroat sang briefly. Common Whitethroat and Sedge Warbler were singing along the edge of the old allotments by the Aspects car park. 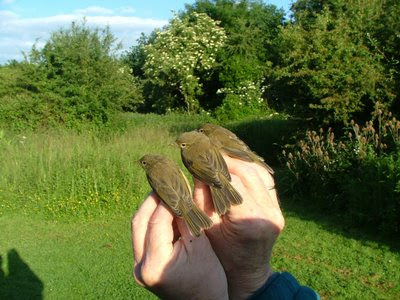 This weekend at the park (getting Otter!)

After all the rain in the week I was pleased to wake to a blue (ish) shy on Saturday. All the usual stuff around the park highlight being the Otter on the Finger Lakes. I was down the end of the Spit scanning west Fingers from the end fishing swim when something slipped into the water just the other side of the fence. I watched for a few moments to see what if anything appeared and suddenly an Otter popped up out of the water, no more than 6 feet from me. I don't know who was more surprised! It dived straight back under and then away along the edge of the Spit. I headed back along the spit and down to the crescent, looking back across east Fingers the Otter appeared through the gap and the adult Great Crested Grebe hastily shepherded it's offspring away from the danger. A couple of dives later it disappeared, either around to Kramer hide or onto the island at the north end of east Fingers.


For a change I decided to head out along the cycle track. At 100 Acre, unsurprisingly the lake was looking very full and 4 Mallard and the Male Tufted were taking advantage. Also by the lakeside were a couple of Lapwing, no sign of the chicks this week. A pair of Common Whitethroat were in the old Reeds just in front of me as I scanned 100 Acre.


At Meadow Lane GP, recently drained, a single Little Egret was roosting. There were also a couple of Lapwing, 3 Gadwall (1f), 9 Black-headed Gulls and a Kestrel.


Further along at the landscaped field just before the bridge over the bypass there were 31 Carrion Crows, 4 Lapwing and a singing Sky Lark. On the opposite side of the cycle path there were 5 Crows and a Rook, 6 Lapwing, 2 Little Ringed Plover and an Oystercatcher.


Heading back along the cycle path a Green Woodpecker was feeding by the side of the track and at the mouth of the Cut a Great Spotted Woodpecker was drumming. It was female which surprised me but apparently both sexes do drum, another lesson learned!


Sunday was much warmer after a cloudy start but surprisingly quiet early on. Numbers were much the same as yesterday exceptions being Lesser Whitethroat which was a no show.


Jackdaws and Crows were noticeable around Fingers this morning, heard but seldom seen. The pair of Cuckoos were again very active around Fingers. There were several mobile parties of Long Tailed Tits, an 18 along the navigation channel with 6 Blue Tits. Another of 8 at the back of the Sailing Club and another of unknown number by the Dead Seat, by the Rough.


The highlight this morning was a Fox on Kingsmead. It's presence was given away by some Crows by the muck heap. They started mobbing it before it came into view and continued doing so until it was out of sight in the long grass.


A great weekend in the park as usual.

A couple of additions to last weekend were:
A Coot with 3 youngsters on west Fingers on Saturday.
The pair of Cuckoos very active around Fingers on Sunday.
Posted by David at 6/08/2008 04:41:00 pm No comments: