After several weeks of short visits, or no visit at all I finally got time for a decent visit. I headed off down the main path towards the finger lakes, an adult and juvenile Sedge Warbler were vocal and showed briefly in the reeds by the main lake. Reed Warblers were also very visible, flitting back and forth between the reeds and the trees. After a brief chat with Dave Kramer I continued around the crescent and down the spit. The Mute Swan family were together in lillypads, still 3 cygnets. The Great Crested Grebe youngsters were very noisy as usual, the remaining three are split 2 and 1 between the 2 adults. A Red Eared Terrapin was hauled out sunning itself in the regular spot on west fingers and I flushed a Kingfisher from it's perch as stopped at the last fishing swim on the west side. As I returned back along the spit a Great Spotted Woodpecker called and I located it in one of the trees about half way along the spit. 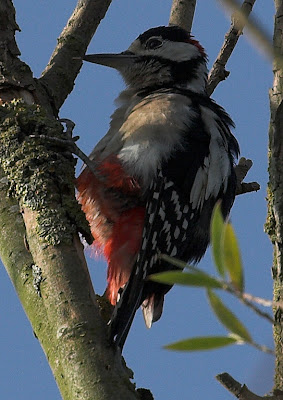 After photographing the GSW I continued around the finger lakes towards the rough in the hope of spotting the Turtle Doves but no luck this week. However a male Blackbird was feeding on some Elderberries and I couldn't resist a few shots of him surrounded by berries with a beautiful blue sky as the background. 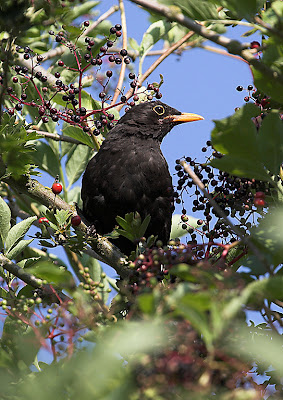 Further round towards the Sedgewick seat two GSW were located in one of the large trees, one adult and one juvenile denoted by the red crown. Further round I stopped at Kramer hide where little was moving but patience paid off when a Green Woodpecker flew to the dead tree in front of the hide where it posed for it's picture. Green Woodpeckers were numerous today judging by the number of calls I heard, as were GSW. 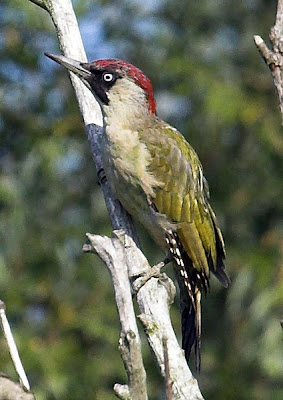 I continued along the navigation channel in the hope of seeing a few dragonflies and damselflies but although there were a few about they weren't as numerous as I expected given the hot sunny conditions. There were even fewer butterflies about!
At the canoe slalom there were 4 Grey Wagtails feeding of which 2 looked like juveniles the other 2 being adults. A Song Thrush was singing along the back river and another at the canoe slalom sluice would have made a good photo had it hung around a little longer.
I headed to the main lake hide and stopped for a while, watching the Common Terns patrolling above the lake and large Carp patrolling below, fins and tails breaking the surface every now and then. 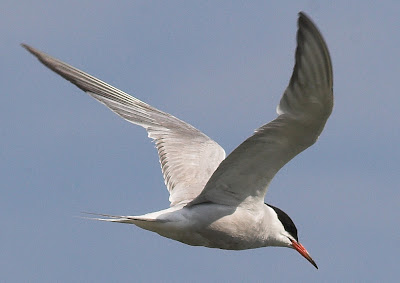 A Grey Heron flew towards the hide and dropped into the water to show just how shallow the lake is in places! 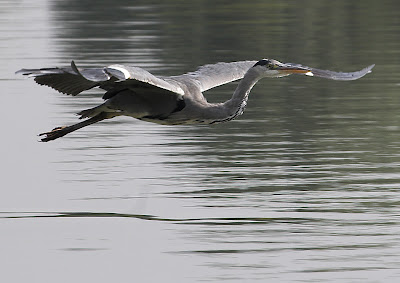 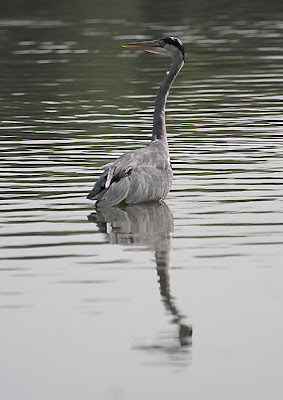 And a Coot cruised by. 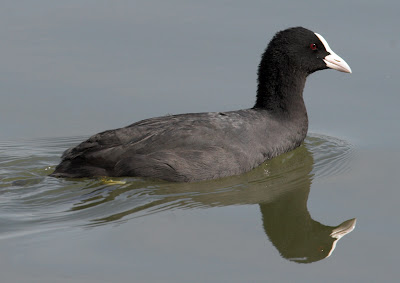 From the hide I headed back to the river and walked up to the Leat Pool. A family of Mute Swans, with 8 well grown cygnets is the largest I have seen this year. They seem to have had a very poor year. I spotted a dragonfly continually patrolling the same area so I attempted som photo's of which this was the best. 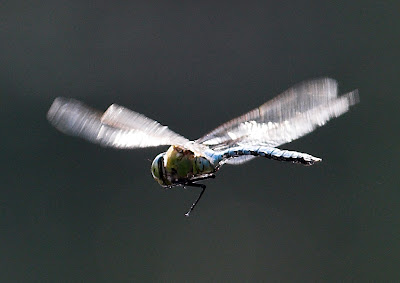 My best guess is that this is a Southern Hawker but if you know better let me know.

Little else of note as I continued back round the main lake to the visitor centre, although the path along the back of the sailing club has been resurfaced and looks good, for now. Hope it lasts.
Posted by David at 8/11/2007 05:51:00 pm No comments: