A dry and bright start to the day, warmer than I expected with the wind from the north east. Once again a number of Gadwall and Wigeon (14) on the weed beds in front of the Sailing club. 100+ Coot were in the same area but there were many more around the main lake with 62 counted later at the east end. JA joined me and we headed down towards Fingers, a small party of 9 Fieldfare passed over low west. Along the Spit a couple of Bullfinch were calling and on West Fingers 8 Gadwall, 6 Shoveller and 14 Teal were feeding. A Kingfisher also flew past. 3 Tufted Ducks were on East Fingers. At Kramer hide at least 4 Bullfinch with one male showing particularly well. a handful of Mallards, a Grey Heron and Green Woodpecker were also seen. A Water Rail showed briefly as it flew between reed beds and then disappeared into the middle of the reeds.

We headed along the navigation channel and JA spotted our first flock of Redwings which disappeared behind the plantation before we could count them. I spotted a distant flock of birds over Riverside, the bins revealed a small group of Starlings with a Sparrowhawk shadowing them. It was like a bait ball with a shark circling!

Along the cycle track at the first pool a pair of Teal, 2 Little Grebe, a couple of Mute Swans and Snipe was a reasonable return. The large lake looked to be devoid of life excepting a Little Grebe and a Moorhen. Meadow Lane GP held about 7 Coot and a couple of Mute Swans. Heading back along the Cycle Track another large flock of Starlings was spotted over the STW. This flock was a bit more significant numbering in excess of 300. A Little Grebe was on the Navigation Channel as we crossed the bridge back towards the park.

The Woodland Walk was quiet as was the north side of Fingers although a couple of Sparrowhawks put on a show over the Rough. A couple of small parties of Redwing passed over low north west, both numbering in the mid twenties.

We continued around the main lake and were surprised to spot a single Swallow over the meadow in the south east corner.

Still plenty of Coot on the main lake with a dozen Black-headed Gulls blogging about over by the hide. Half a dozen Cormorants were over on the island. Gadwall and Wigeon were still on the Weed but when the Sailing Club opened for business the Wigeon Soon departed north east.

So a pretty good morning all in all with in the region of 100 Redwing and Fieldfares through and plenty of ducks in with very good views of Gadwall in the north west corner of the main lake.
Posted by David at 10/16/2010 02:12:00 pm No comments:

Weekend migration steps up a gear 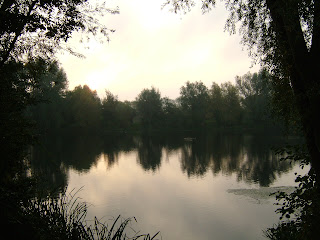 DK & EN walked the full two hour transect this morning. It started in dull light but eventually the sun shone through. There was far less wind this morning compared to yesterday's.

Wildfowl on the main lake included Mallard, Gadwall, Wigeon, Tufted, a lone male Pochard, Shoveler, Teal and a Little Grebe, in addition to the "permanent" Coot, Moorhen, Cormorants and Mute Swans. Great Crested Grebes were down to three on the main lake with two on Fingers. There was a good deal of disturbance from 9 o'clock as members busied themselves at the Sailing Club, forcing many of the birds to take flight. That allowed some increased counts to be made as the birds flew around.

On dry land (in the bushes, etc), singleton Reed Warbler, Blackcap and Reed Bunting were unexpectedly found. A fair number of Robins and Chaffinch were seen/heard with lesser numbers of Dunnock and Wren. On the thrush front, Blackbird and SongThrush were outnumbered by Redwings. Overhead, small parties of Redwing moving south or south-west were almost continuous; the first real day of visible migration of the species. Other birds over and calling included more than usual numbers of Sky Lark (going east into the wind), small bands of determined Wood Pigeon, singles of Kingfisher, Siskin, Redpoll, Linnet and Chiffchaff, a poss. Brambling, with twos and threes of late Swallows hurrying south-west later on. There was a good passage of Lesser Black-backs south-west, lasting most of the two hours of observation. 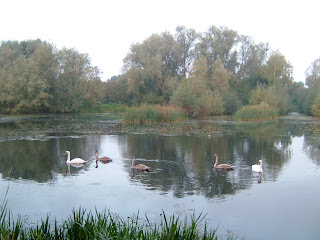