A brief visit mid-morning taking in the Finger lakes. Very quiet to start with, walked from the steps right round past the rough to the hide without seeing much at all!


At the hide the Wrens nest had been pulled down and thrown outside (hope they fledged first!). The Mute Swans came into view over the back with their 3 cygnets. A Moorhen is still sitting on the nest at the back of the right hand channel and one of the adult swans had a brief dispute with it. A lot of noise erupted over the back with different bird alarm calls but mainlt blackbirds followed by a couple of barks from a fox. Reed Warblers still active in the left hand reed bed.


Continuing around Fingers the Great Crested Grebes had split up with one Adult and one chick on east fingers. The crescent has flooded again but is passable with wellies. As I walked down into the crescent and went to cross the bridge I noticed a tiny 3 inch long pike swimming across the flooded bridge in front of me. At least one Reed Bunting was singing in the crescent.


At the spit looking into west fingers the other adult Grebe was with the other 2 youngsters: 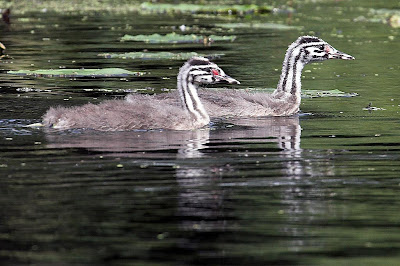 A moorhen also came in quite close to the bank where I sat for a while: 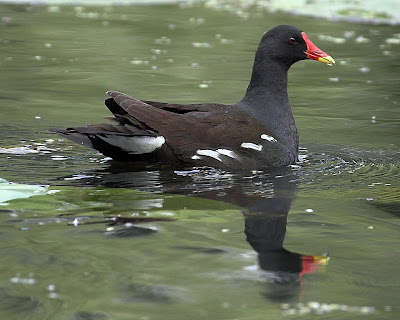 I counted around 40 Mallards on West fingers before I was distracted by the Turtle Dove calling from the Rough.

I headed off round to the Rough in the hope of photographing the Turtle Dove but it was nowhere to be seen so i had to make do with a Meadow Brown butterfly: 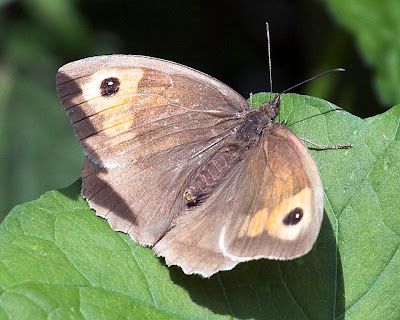 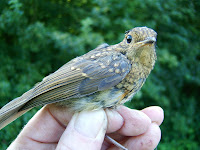 A better day ... for weather!. Got to the park just as the Jackdaws decided to leave ... noisily. An adult pair of Sparrs annoying the residents of the Rough for some time. Jim Crow saw off Mr Sparr eventually and Mrs Sparr decided to try and tear down one of my nets at high speed. (Ha, ha, the noisy Blackbird was in my hand!). 4 Swifts & 1 H.Martin overhead, but 100+ Smarties over the main lake. A lot of Woodpecker traffic. 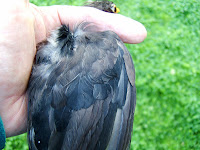 Todays catch consisted of: 1 juv.Whitethroat, 1 juv. Lesser 'throat (another in bush) in heavy PJ moult, i juv.Blackcap, 1 juv Song Thrush (makes 8 STs caught this year so far - amazing), 2 juv. Garden Warblers and a female giving up the nesting game, a mummy Chiff in moult, 8 Reed Warblers all told, 6 juv. Robins and a male and a 1st summer male Blackbird that doesn't know the right way to moult!. 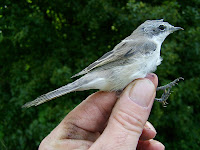 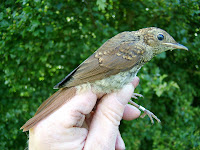 Two family parties of Goldfinches zooming about and sitting on the thistles, but no joy (anyway, I can catch them as easy as pie at home first thing - and they're the same ones). 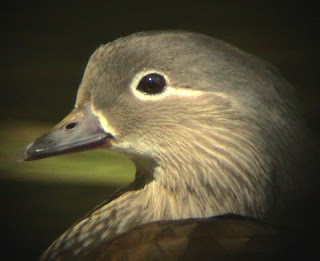 Not done alot in the park this week - but interesting, none the less. Tuesday - whilst watching two Common Terns over Fingers, picked up a Buzzard over Summerhouse Hill. Moved to watch some more - and a Hobby came up river very low and slowly too. Some young Broom colour-ringed terns over the main lake. The two Coot youngsters seem to be graduating OK. The pair of Swans on Fingers had three cygnets last Saturday and have trundled them around all of Fingers this week. The Grebes now only have three half-grown young. Had 60-90 Mallard and the Mandarin most days from the Spit. The wet weather is suiting the Blackbirds!
Went ringing on the Crescent on Thursday - 18 birds, 13 of which were Reed Warblers & 4 of those were this year's young. Other birds included a second male Reed Bunting (nesting in Crescent, too), a young Blackcap caught 4 weeks earlier and now starting its PJ moult (won't be long before it's off), a very fresh juvenile Sedge Warbler probably from over by the lock, a male Greenfinch from Oct.'05, a Blackbird from Mar.'05, and a female Reed Warbler that was at least 5 years old and first caught in June '04.
Took a walk along the cycle track on Sunday. Plenty of Sand Martins sitting on the wires, and Pied Wags "Chiswick-ing" over the sewer farm. At Meadow Lane pit, there were 2 Green Sands, 2 LRPs, 2 young Moorhens, a brood of Mallard with mum, a Grey Wag and a Tufted. Opposite, in the elder, 2 Whitethroats were trying to out-sing each other. A bit further along, were Sky Larks and Linnets and, from the by-pass bridge, a party of Greylags and fg young, with a family party of Green Woodpeckers calling from the trees towards the Cople road. Lots of butterflies, damsels and other insects in the rough grass.
Posted by Unknown at 7/22/2007 04:45:00 pm No comments: