Despite the lack of a visible frost on the ground, a very cold morning with a biting breeze. On arrival headed down the main path alongside the main lake. Flushed 2 Kingfishers and a Little Egret from the north side of the lake. The Little Egret departed east after doing a couple of fly pasts. 6 Tufted Ducks were circling high over the main lake. I continued around to Kramer hide in the hope of seeing Otters, a Great Crested Grebe was on east Fingers as I passed. On arrival at the hide it was very quiet with just a couple of Moorhen the only signs of life. I settled in and waited for some action. A little later a pair of Gadwall and a couple of Shoveller appeared through the gap to west Fingers. The Gadwall came through the gap and hung around in front of the hide for most of the time I was there. Another Great Crested Grebe was seen, through the gap, on west Fingers. A Little Grebe came through the channel from east Fingers and was seen over the back behind the reed beds. 50 Lapwing flew over heading south. A male Sparrowhawk flew in and perched in the trees above last years nest. 10 Teal flew over and dropped in to west Fingers. A male Teal swam into view from the right of the hide. A scan of the far edge of the lake revealed a Muntjac. It was given away by it's reflection in the water as it was hidden by tree. DK dropped by the hide and said he had put up the 10 Teal from round by the Sedgewick seat.

With no sign of any Otter action I departed the hide and continued around the Finger lakes. There were 35 Canada Geese on Kingsmead and 3 Cormorants in one of the trees by the back river.

A single Redwing was in the newly coppiced sheep pen. Three Gadwall and 2 Shoveller were seen on west Fingers from the dead seat. I continued around to the main path and headed down to the spit. From here it was clear that there were 2 Great Crested Grebe on the Finger lakes, one either side of the spit. A Kingfisher was flushed from the trees as I walked around the Crescent.

At the beach I counted 35 Great Crested Grebe in that corner of the main lake. There were 12 Mute Swans but 8 were chased off by one of the resident pairs. There were 2 male Bullfinch in the trees by the beach end fishing swims. 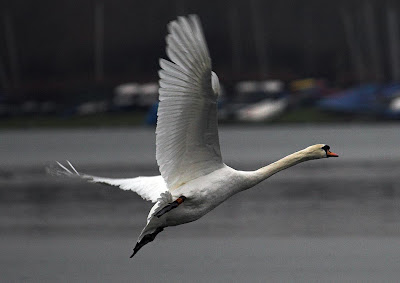 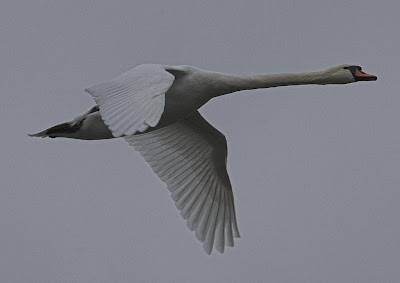 One of the departing Mute Swans
At the main lake hide there were 18 Pochard, 12 Tufted Ducks, 20 Shoveller and 22 Cormorant.
At the south west corner of the lake another 4 Great Crested Grebe were seen. 2 Fieldfare flew over east as I reached the car park.
Posted by David at 12/15/2007 12:54:00 pm 1 comment:

Very windy today. Stopped off at Kramer hide in the hope of Otters again but no joy this morning. There were 3 Gadwall (2m1f) and 4 Grey Heron. A Cormorant was seen fishing, in front of the hide, a couple of times during the wait for Otters. A Kingfisher also did a couple of fly pasts, stopping off in the tree to the left of the hide for a moment, didn't hang around for his photo though!

Nothing on east Fingers but 7 Little Grebe, the resident pair of Swans and another Heron on west Fingers.

Very tough conditions for counting on the main lake with waves big enough to hide a duck! Rough counts returned 30+ Great Crested Grebe, 20+ Shoveller and Cormorant, 3 male Tufted Ducks and 13 Pochard (10m3f). Didn't see the Goosander today and also no sign of the Wigeon or Little Egret. There were 4 Mute Swans of which the pair near the hide seem to be holding territory in that area.

Got up to 9 Heron in total around the park. Much less Kingfisher activity today although I can't blame them, I would rather have been in doors!
Posted by David at 12/10/2007 01:00:00 pm No comments:

Another early start to beat the rain but also in the hope of seeing Otters again. Headed across the fields past the labyrinth to Fingers. Flushed a couple of Teal from the bank side reeds as I passed the Sedgewick seat.

On reaching Kramer hide there were a pair of Gadwall out in front of the hide, they were joined by another male. A single Mute Swan flew over the hide heading towards the sewerage farm. At around the same time as I sighted the Otters yesterday a single animal swam, left to right, in front of the hide. No hanging around today though as it just disappeared into the reeds by the channel through to east Fingers. A female Shoveller flew in. A couple of Heron were in the usual roosting place. A Cormorant came into the Kramer lake and caught a fish before departing. A flock of 14 Long Tailed Tits worked the area around the hide then flew to the trees in the middle island in front of the hide. With no sign of the Otter coming back I left the hide and headed down past east Fingers, round the crescent and onto the spit where I flushed a Kingfisher which flew across West fingers, down the second finger.

The resident Mute Swans were feeding on West Fingers at the main path end. As I walked down the spit a Cormorant flew from west Fingers. 3 male Bullfinch were working the trees along the spit. Only 5 Little Grebe today, all on west Fingers.

At the hide there were 13 Pochard (3f), 3 male Tufted Ducks and a pair of Wigeon. Also 23 Shoveller, 5 Mute Swans (2 pair and a youngster). 26 Canada Geese flew over north. There were 4 Goosander again today split 3 and 1 although they all came together later. There were a lot of Mallard around the hide and a quick count totalled 62 including some hybrids. A single Coot came out of the reed bed to the right of the hide. 3 Canada Geese were on the lake. Great Crested Grebe numbered 33 and there were 27 Cormorant. A speed boat on the lake put up most of the Shoveller and the Wigeon. As I left the hide the hybrid Canada/Greylag Goose flew in. 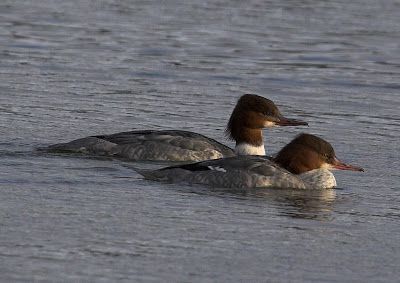 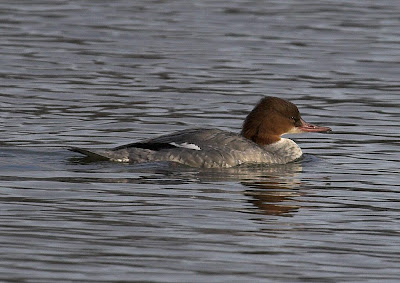 A couple of Goosander images
At the Leat Pool a Kingfisher was calling and another male Bullfinch was in the trees nearby.

When I reached the south west corner another? Kingfisher was calling and a Heron was in one of the usual spots. Another well timed visit as the rain started just as I was leaving.
Posted by David at 12/09/2007 04:27:00 pm 1 comment: