After a couple of weekends away it was good to get back down the park to see what had changed. First thing of note was the 4 cygnets with the 2 adult Mute Swans by the island on the main lake. The number of Mute Swans on the main lake is still very high with a max count of 95 this morning. The Canada Geese seem to have given incubating their oiled eggs now and 68 were on the grass in front of the sailing club first thing.

JA joined me and we wandered down to the Finger Lakes where both Great Crested Grebes were in the middle of east Fingers. One of them looked very fluffed up so we suspected a chick was on its back. Several minutes later we were rewarded when a small stripey head appeared.

Little else of note on Fingers excepting 2 Occupied Coot nests with a couple of youngsters from the first broods hanging around nearby.

We had noticed a number of trees covered in web and when we reached Kramer hide we found the culprits were caterpillars, probably from one of the ermine moths (Spindle Ermine?). They were hanging from long threads of silk, many in large bunches, surely a welcome meal for the many young Tits around the park. It was like an assault course trying to get to the hide while avoiding the silk lines. 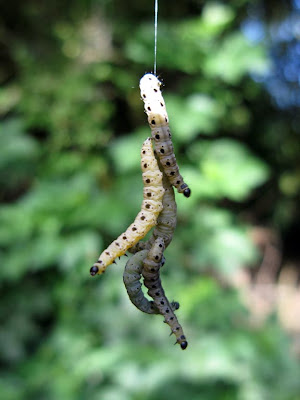 We headed out along the cycle track and the large lake on 100 Acre provided the most interest with Little Grebe calling, Redshank (2), Lapwing (min 5), Grey Heron (5) and several Mallards (inc. 4 ducklings) and Tufted Ducks. A couple of Pheasants got into a fight along the edge of the lake, always fun to watch. A Great Crested Grebe with a slightly larger chick riding on its back was a nice surprise.

Just a couple of Tufteds, pair of Coot and a Mute Swan on Meadow Lane GP and a few Tufteds, Coots and a GCG on the Tern Pool. A single Yellow Wagtail showed well before disappearing into the crops alongside the Tern Pool.

There was a Common Buzzard over Octagon, drifting towards Cardington as we made our way back to the park.

Little else of note for the rest of the walk although a text, belatedly picked up by JA, from EG left us frustrated having missed a Red Kite over the Rough. Another time maybe. 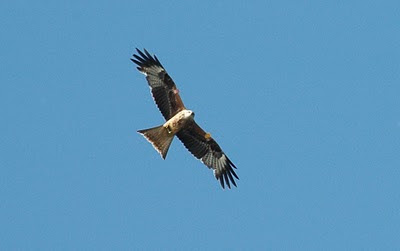 Red Kite over the Rough (Picture courtesy of Dave Kramer)

More info regarding the Red Kite courtesy of EN:

Note: This bird was picked up flying over ‘the Rough’ during a CES visit at 08:35 BST and was subsequently identified by its wing tags (Right=pink, Left= orange) from a photograph by Dave Kramer.

Young from the Chilterns population were released in West Yorkshire from 1999-2003. No birds in this population have been wing-tagged after 2006.