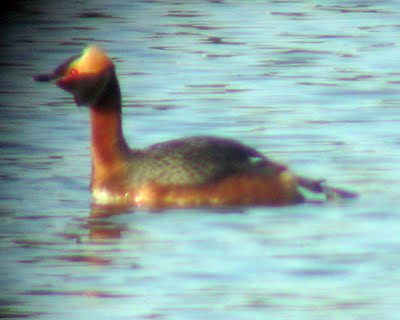 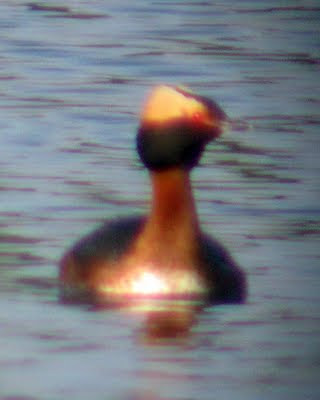 Spotted this cracking little bird when I arrived this morning, just before 0700. It was associating with a Great-crested Grebe to start with. I managed to get these shots with my Canon G7 hand held through my scope, not great but good record shots none the less. We seldom see them down here in breeding plumage, should be in Scotland, Scandinavia or northern europe now.

No big surprises this weekend with all the usual suspects present. The Cettis Warbler is still singing well and roaming around the Spit and Rough.

I headed down to Meadow Lane, with JA, to check for the Nightingale which was persuaded to sing with a little help from my iPod! I played the Nightingale song on my iPod in the area we had heard the bird last week and sure enough it started singing.

We watched a Kestrel hunting over 100 Acre, and it dropped onto something, wrestled with it for a moment, then flew directly to a tree on Riverside. As it arrived at said tree a second Kestrel shot out, there was a brief scuffle (presumably the food pass) and both disappeared.

We checked out the tree when we got back to Riverside but could not see any obvious nest although we did not get too close and the foliage was quite dense.

We continued, on Riverside, along the Cut and had a single Buzzard high over head, being buzzed by a couple of House Martins.

Back at the car park the usual Willow Warbler was singing in it's regular spot and the Blue Tits were visiting their nest in the automatic toilet sign. Unfortunately they have a hole into the back of the sign so we cannot see any of the action.
Posted by David at 5/15/2011 09:22:00 am No comments: