Another day off to help the Rangers oiling the Canada Goose eggs. More on that later, as usual I got to the park early to have a look around. Nothing outstanding to report although a Common Sandpiper on the Beach was nice to see. Did have a couple of Gadwall oddities: 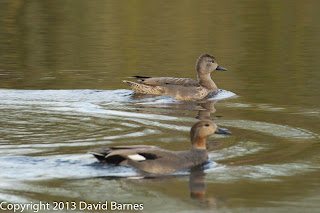 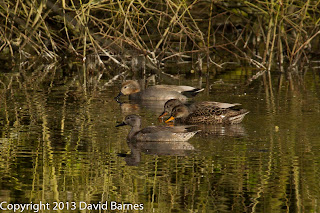 The bird I was focussed on is at the back in the first picture and the front in the second. You'll note the missing black rear end. The flank is also showing a smaller grey area than it should but other features appear to be standard. The white speculum and black and chestnut in the upper wing were all present. Having looked at pictures today it might be just that the bird is moving into eclipse plumage a bit early.

Also looking at the pictures the other bird in the top picture which is also at the back in the second picture is showing strange colouration on the head, again other features are standard male Gadwall.

Back to the egg oiling. We revisited the main lake island which the rangers first did a couple of weeks ago. It was a bit of an eye opener after last week gentle introduction to egg oiling. several of these birds were very feisty indeed and having Rangers Danny and Nicky fending them off, while myself and volunteer Alan did the recording and oiling, was a welcome shield!

This visit we located 22 nests and oiled 86 new eggs.

In the afternoon we revisited the Finger Lakes. It's quite tricky getting to some of the nests on the spits where you don't have room to get on land without shifting the geese first. One particular pair gave me a couple of good whacks as I tried to fend them off and give Alan time to get off the boat to help me.

Despite lots of searching we found just 1 new nest with 4 eggs and an old nest with a couple of new eggs. We did also come across a young Muntjac which got a bit fed up with us invading its spit. It would move and we would check the Spit and then move to the one where it had moved to. Evetually it got the hint and moved to the area we had already checked.

We spotted another Terrapin sunning itself around the back of Fingers and there were some really good sized Carp cruising around on West Fingers.

The rest of the egg oiling stats so far are as follows:


So a total of 270 eggs oiled so far this year. The Rangers will continue visiting the various sites over the coming weeks until the birds give up and abandon the nests.