With the assistance of my trainee [head honcho at BTCV] to carry the ladder, we successfully cleaned and repaired 12 nest boxes in the conservation area. We attached metal plates to repair the woodpecker and squirrel damage as well, 6 smaller, Blue Tit ones and 6 larger, Great Tit ones. Hopefully, they will all be used again after a gap of two years. The ringers will monitor the boxes in May and ring the pulli when they reach the right size. Having carried the ladder, there are now 3 ringers who know where all the boxes are!
Posted by Unknown at 2/16/2008 06:39:00 pm No comments:

Very quiet this morning at Kramer hide. A Moorhen fight was the highlight. Had only seen a couple of Moorhen until a squabble broke out, then they all came out of the woodwork! While two were locked in a death grip others kept diving in for a free shot. Turned out to be at least 7 Moorhen in the right hand channel and surrounding reed beds, might have been as many as 10.

Five Shoveller swam past (2 pair and a gooseberry male), 2 swam through and the other three remained in the reed bed directly in front of the hide for a while. A single Little Grebe showed up in the channel to east Fingers and a Siskin came down to drink nearby. A group of 8 Teal flew in and a large group (30+) flew through. Another group of 15 flew in but they may have been part of the larger group that flew through (min 38, max 53+). The resident pair of Mute Swans were getting aggro with the Canada Geese which were very vocal and quite aggressive this morning. A single juvenile Heron was in the usual roosting place (EN reported 4 later). A Green Woodpecker passed through stopping in the dead tree opposite the hide for a few moments.

Having left the hide I walked downstream alongside the navigation channel and back along the Long Hedge. A brief snatch of Chiffchaff song was heard from across Kingsmead, where 44 Canada Geese grazed. 8 Moorhen and a pheasant were also seen. A Mute Swan was grazing in the meadow by the navigation channel. It looks to be injured or sick as it is very approachable and is probably the same one as was seen last week in the same area.

On east Fingers the Great Crested Grebe pair were joined by the pair of Mute Swans. On west Fingers there was a Coot (pair seen later by EN), some of the Shoveller and several of the Teal. No more Little Grebe although EN reported 4 seen later. Leaving the Spit I headed around the main lake and heard a Reed Bunting singing from the Crescent.

Went in to arrange some habitat management work.
A quick check on the Pochard gave 37 birds only; this is down from 110 on Sunday. No Tufted. The birds seem to be clearing off early - but will they be back at the week-end when its a return to low temperatures, low cloud and an east wind!
GC Grebe on the main lake totalled 20, plus the potential breeders on Fingers.
Posted by Unknown at 2/12/2008 03:09:00 pm No comments: 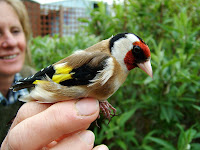 Entertained by 3 singing Goldf., 2 singing Sonth., 2 singing Bullf. (pairs), Sky Larks over, Kingfisher fishing by No.2 dipping platform. Ex-copper wanted to know if I was legit. - could tell by my gear and dexterity. Stood and watched with interest. He caught an Irishman taking Goldfinches in the Park, way back in '65. This has been the only such 'dead cert' prosecution in the county.
Posted by Unknown at 2/10/2008 04:12:00 pm No comments:

Another crisp cold morning, half a degree below freezing as I drove to the park. Headed straight down the main path and had a Water Rail in the main lake reedbed just before I reached the steps. A little further along there was a Coot on the main lake, just out from the reed bed, and a count of Mute Swans totalled 32.


The pair of Mute Swans was on east Fingers. At Kramer hide another Water Rail, this time running along, at the edge of the water, in front of the hide. There was also a female Gadwall and at least 5 Moorhen on the water in front of the hide. A male Muntjac moved left to right along the far bank, stopping at one point as if to cross the water to the right hand reedbed. However having got in up to his chest he decided better of it and backed out, continuing along the spit. The Mute Swans came through from east Fingers and one came out of the water for a preen and displayed its orange ring. It is definitely female 500, the breeding female from last year, back on her old patch. Probably got fed up with the new comers on the main lake. 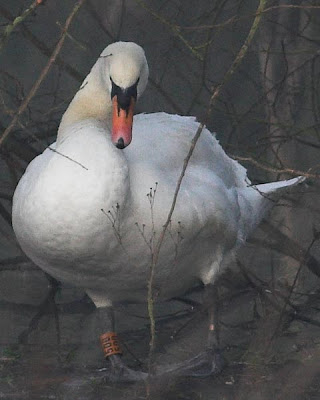 At the crescent a Water Rail called from the reedbed and Dunnock, Chaffinch and Reed Bunting were singing in the trees around. 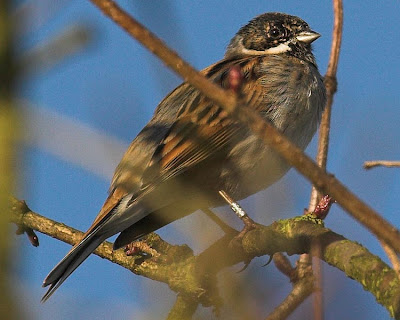 This male Reed Bunting has a ring but I can't make out any of the details.

On west Fingers there were 4 Shoveller (1f), 1 Coot, 1 female Gadwall (probably same one seen earlier at Kramer hide), Pair of Great Crested Grebe, 16 Teal and 2 Little Grebe. As yesterday there was a Great Spotted Woodpecker drumming over towards the dead seat. 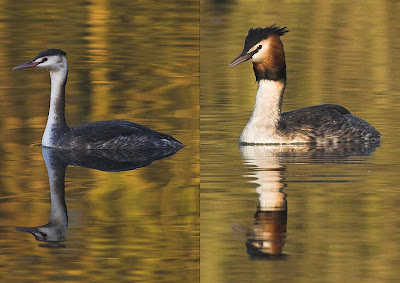 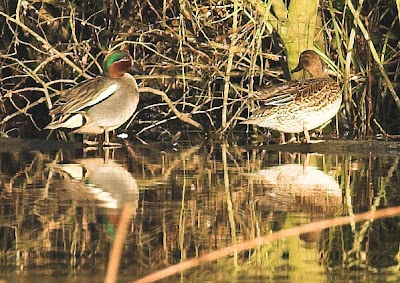 A pair of Teal having a preen in the sun.

While heading round to the steps a Kingfisher called from the beach end of the main lake. Errol was ringing in the Rough and had 7 or 8 birds while I spoke to him. Along the navigation channel there was a single Mute Swan and a Cormorant. On Kingsmead there were 59 Canada Geese, 9 Moorhen and a Pheasant. I walked up to the kissing gate and then back along the Long Hedge where a Chiffchaff was singing.

There looked to be less Pochard on the main lake today but again this was only an observation from the north side of the lake.