A relatively warm and sunny morning today and some good birds around the park.

I met up with JA and the Slavonian Grebe was quickly found, in the north east corner of the main lake not far from the dipping platform. The Crescent is now accessible with wellies and we had 45 Corn Buntings leave the reed bed roost as we wandered around. A couple of Water Rails squealed in the reed bed and at least one Reed Bunting was present. Along the Spit it was fairly quiet with just a fly over Siskin, 4 Teal on west Fingers and another Water Rail making its way along the edge of east Fingers.

DK joined us and reported a couple of Goldeneyes, but hadn't seen the Slav. We managed to relocate the Slav, now in the south east corner of the main lake with the Goldeneyes. 5 Siskins were in the Alders around the Crescent.

A circuit of the Finger Lakes revealed little else of note other than a couple more Teal on west Fingers and 3 Goldcrest along the north side before the Sedgewick Seat.

There wasn't much about on 100 Acre. Most of the flood water has subsided on Riverside leaving a muddy mess, looks good for waders!

Kingsmead held a few Canada Geese and 31 Pied Wagtails which was a bit of a surprise although we do get good counts after flooding that is usually when there is a bit more water left.

From Kramer hide we found 6 Shoveler, a few Mallards, a Grey Heron and a Moorhen.

There were a couple of Grey Wagtails at the south end of east Fingers, occasionally flitting across to the Beach.

A circuit of the main lake found us little else of note just the usual Gadwall, Tufted Ducks and Pochard. We were unable to relocate the Slav Grebe but it may have been about. There was another Goldcrest along the south west side of the main lake.

TP reported a Blackcap in the Spindle around the car park but we failed to find it on our way back to the cars. A Goosander flew over, heading west.
Posted by David at 12/08/2012 04:11:00 pm No comments:

The final volunteer Sunday of the year and a good turnout for a scrub clearance session in one of the plantations on the New Meadow. The weather was a massive improvement on the previous month, cold and clear. A big fire to burn all the cut scrub kept everyone warm and provided the fuel for the "end of season" barbecue lunch, kindly provided by the rangers. Thanks also to Alan for the venison and his mum for the cakes!

There is still more to do in this plantation but it already looks a whole lot better than it did when we started.

I had a wander around Fingers with DK and TP before the volunteer session started and we relocated the Slav Grebe on the main lake at the east end. A Water Rail was heard in the Crescent reed bed and TP picked up a Green Sandpiper on call as it flew over. DK amazingly spotted it and got us on to it as it flew west. A Jay was seen by EG who was ringing in the Rough.

A few Siskins were flitting around, a couple of Treecreepers were in the trees between the main lake and west Fingers. The usual mix of overwintering ducks were around including Shoveler, Teal, Gadwall and Pochard. There was a also a Goldeneye and DK had a drake Goosander early on but TP and myself were unable to relocate it a little later on.

After the volunteer session I had a quick wander around Fingers again. There was a good sized mixed flock of Tits at the north end of the Spit with at least one Goldcrest and one Treecreeper mixed in. I managed to relocate the Slav Grebe again at the east end of the main lake and when I headed back along the main path it was showing well just off the dipping platform. A party of 10 Long-tailed Tits were in the Willows along the edge of the main lake. A couple of Herring Gulls were shadowing a party of Tufted Ducks that were feeding in the north east corner of the main lake.

No sign of any Little Egrets or Corn Buntings but I may have been a little early for those coming into roost.

The next Sunday volunteer session is January 6th, meet at the Visitor Centre at 9am. If you can't make the whole day then come along when and for as long as you like. All help is welcome.
Posted by David at 12/03/2012 09:21:00 am No comments:

A glorious day, a bit on the cold side but if you kept active and wrapped up, you could certainly keep warm. I was out ringing in the rough.
﻿ 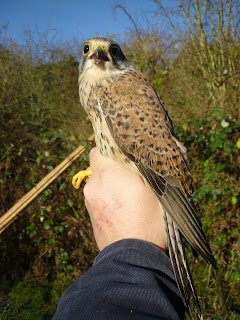 Above: An adult male Kestrel. This is only the second ringed here (the other in 2003). 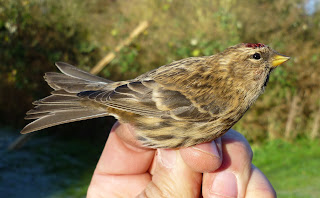 Above: 6 more of these Lesser Redpolls were ringed today. I like an excuse to show another picture of one of these!

Totals for the day (retraps in brackets):