Went to check on the feeders am - Gt. Spot hanging on one of them. Both almost empty as were the centre ones! Took a stroll with DB. before going back to VC. Ranger not around so had to wait until pm to access store where our peanuts are kept. Feeders very busy. Many rabbits, several Blackbirds, a Song Thrush, pair of Bullies & the usual Goldies also around the Rough. On way back, 115 Lapwings south @15:10 and the fg male Sparr circling over the Beefeater plantation. Lots of squabbling BH gulls around the car park. Wont be long before they all b****r off to the Wash.
Posted by Unknown at 2/23/2008 03:57:00 pm No comments:

A mild cloudy morning and another early start. While heading for Kramer hide I flushed a couple of male Shoveler and a pair of Teal from the lake by the Sedgewick seat. At Kramer it was initially quiet with just a Moorhen and a pair of Mallard. The quiet was shattered by 11 Canada Geese which decided to use the lake in front of the hide as a battle ground. A group of 3 were set upon by a pair and group of 6. Things settled down again with the group of 6 hanging around and feeding for a while the pair and the 3 departed to other parts of Fingers.

A Green Woodpecker called regularly from over towards the Sedgewick seat and the usual Song Thrush was singing strongly from the conservation zone to the right of the hide. Other Moorhen showed themselves during the morning, totalling about 4 in all. The Little Egrets were not about this morning but white feathers below the normal roost area showed they had most likely been on roost last night. A Kingfisher flashed past the hide and then returned later, sitting in the tree to the left of the hide for a while. Two Shelduck flew over heading south.

A Little Grebe came in from the left corner and was starting to show it's breeding plumage. A young Heron flew in to the usual roost tree but was surprised by a Muntjac, which was equally startled by the Heron. The Heron flew on but returned a little later and was joined by a second adult bird. Three male Shoveler flew in to west Fingers. A Shoveler swam in from west Fingers and started feeding over the back of the reed beds. The Shoveler's hasty departure, followed by that of the Little Grebe, heralded the arrival of an Otter which grubbed around in the big reed bed for a while before doing a disappearing act.

Having left the hide I walked, downstream, alongside the navigation channel and back along the Long Hedge. There were 21 Canada Geese on Kingsmead along with 8 Moorhen and a Pheasant. A Green Woodpecker called from the far side of Kingsmead. Two Kingfishers called noisily as they chased, at tree top height, along the Long Hedge. There were a pair of Bullfinch feeding up by the kissing gate and a Chiffchaff was singing in the same area or possibly across the access road by the Cut.

Heading back past the Sedgewick seat a Water Rail flew from the reed bed, across the water to the far bank. From the Dead Seat there was Coot on West Fingers. At least 4 Bullfinch (2m2f) were in the trees at the edge of the Rough.

At the end of the Spit there was a Treecreeper in the fenced off section, it flew back along the Spit. There were 2 Little Grebe on west Fingers, 5 Shoveller and a Great Crested Grebe. The pair of Great Crested Grebe were on east Fingers along with the resident pair of Mute Swans. Back along the Spit by the main path 7 Siskins flew over but didn't hang around. A Water Rail squealed in the Crescent reed bed.

From the main lake hide there were c.27 Mute Swans. Obviously used to being fed by the Rangers they were following the pickup truck around the lake but flew back to the hide when the truck departed. 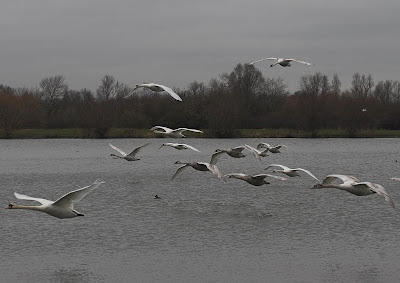 Most of the 50+ Pochard were also following the "food wagon" and followed the Swans back to the hide. 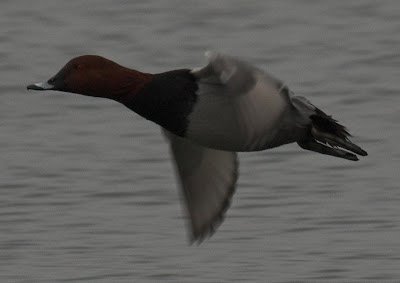 Also on the main lake were 3 Shoveler (1f), 5 Great Crested Grebe, 14 Cormorant and a red head Goosander. Great Spotted Woodpeckers called from the beach end and south west corner of the main lake. Back at the car park a Pied Wagtail flew over.

What a change in the weather. As I arrived (opening hours), the Sparrs were sky-dancing over the potential (re-useable?) nest site. As the feeders were full(-ish), I put up a couple of nets to have a bash at the tits. We try to give them a winter "health check" and it's also a good time to get those perishers that spend the summer away from the CES site. One thing, it often turns up the longer living birds and the ones that don't resort to the centre's yard feeders when there's nesting work to be done!

Well, first I caught a 7 year old male and that upped the elapsed time for Blue Tits. Then I caughta 6 year old female that had been ringed as a juv - and that beat the other one. Also in the nets, a Lotti from 2003. On the Great Tit front, recaught a male that was ringed as a pullus in 2003. So not a bad couple of hours work

In the afternoon, I had to make up a poster. Then I walked round the F.Lake. Highlight = 2 Little Egberts about 15:30, ensconced opp. the hide. We need a bread tray or two lashed up in the upper reaches of the willows! Also had a singing (briefly) Chiff.

PS. Cetti's singing at a private site again this year. We'll try to catch it to see if it's the same one!. 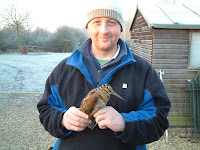 Arrived early to check for Otters but nothing doing again this morning. Very cold start with minus 5.5c on the car thermometer on my way to the park. A good covering of ice over most of Fingers and significant portions of the main lake, even the navigation channel had a covering along a lot of its length. On the way to Kramer Hide a Chiffchaff was singing in the long hedge just after I left the conservation area having just passed the Sedgewick Seat.

At Kramer hide little movement with just a couple of Moorhen showing some tentative nesting behaviour. A female Muntjac was feeding on the far bank at the back of the right hand channel. A male Sparrowhawk flew in, from behind the hide to the trees on the far bank, below the old nest site. I left the hide and had a pair of Coot on east Fingers along with a single Little Grebe and a Great Crested Grebe. A Reed Bunting was singing in the Crescent.

I joined the guided walk and we headed down the main path to the steps stopping to scan the main lake for "odd" Gulls but finding only BH, LBB and Common. EN counted c.40 Pochard and there was a Male Tufted duck in amongst them. We turned off the main path at the steps and continued around the Finger lakes. There were plenty of Finches and Tits about and a single Heron on west Fingers. The pair of Sparrowhawks showed briefly overhead. Just passed the Sedgewick Seat we stopped to watch a Treecreeper while a couple of Green Woodpeckers called behind us. Leaving the conservation area a beautiful Male Bullfinch was sunning himself in the Long hedge with a female nearby. Another Treecreeper flew from the Long Hedge to join the other one we had just seen. We followed the Long Hedge up towards the kissing gate pausing to watch a female Great Spotted Woodpecker in the top of one of the trees. The "sickly" Mute Swan was still on the meadow grazing but had moved back onto the water as we walked back along the navigation channel. There were 8 Moorhen on Kingsmead.

By east Fingers we stopped and watched 6 Little Grebe at the north end. Further along a single Coot and a Great Crested Grebe were seen but then we noticed a number of ducks circling and estimate 20+ Shoveller and 20+ Teal most of which finally settled on east Fingers. A pair of Wigeon joined them. They had all been put up from the main lake, by a group of canoeists, and had no where else to go as the rest of the Finger lakes were still frozen. We searched for Siskin along the beach end of the main lake and crossed the Leat and walked back along the canoe slalom. Our final hope for Siskin, by the Crescent, was in vain, maybe next time. There were 38 Mute Swans on the main lake. That's about it another cracking morning in good company and some great sightings. See you at the next one.
Posted by David at 2/17/2008 02:14:00 pm No comments: