A small flurry of snow didn't stop the bird ringing session this morning in 'The Rough.' The birds came in small flurries themselves although there wasn't much movement or singing from them at all today. 12 fly over siskins, a bullfinch and a redwing were visual highlights. 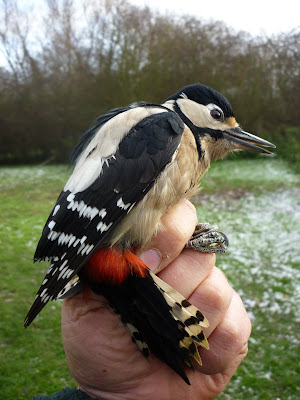 Above: The 3rd Great Spotted Woodpecker (adult female) caught in 'the rough' during the last 2 sessions.

Below: An adult male blackbird. There are lots of these feasting on the berries at the moment. 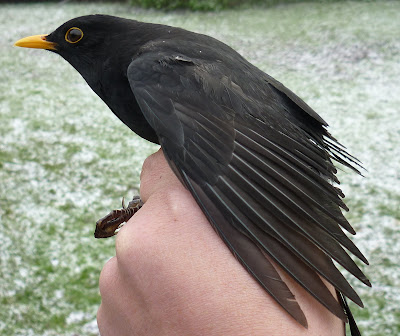 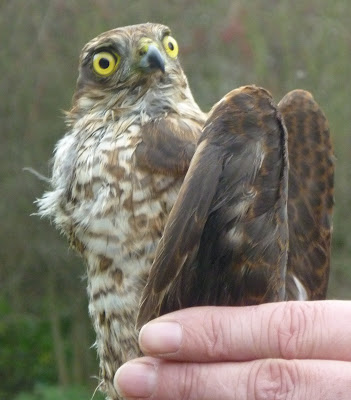 On my pre-walk recce I had 4 Siskins over, 2 at the VC and 2 at the south east corner of Fingers. A Water Rail was heard calling from the north end of west Fingers. There were a minimum of 6 Teal spotted from Kramer hide, through the gap. 2 more Teal were around the back of Fingers by the Sedgewick Seat. 3 Little Grebe were on east Fingers.
During the Walk we had a Sparrowhawk high over Pressmead seen from the north side of the main lake. A little further along the path a Skylar passed overhead, west.
Following report courtesy of EN:-
Sunday: My last guided walk for the public at Priory CP today.

Plenty of interest on the main lake early on, in strong contrast to late morning when four double kayaks paddled through the winter wildfowl exclusion zone (almost every thing left!! including the gulls!!). 30 Cormorants, 14 Wigeon, a female R-C Pochard, ~30 Gadwall, ~100 Coot, 8 Tufted, an increasing number of 'straight' Pochard, Great Crested Grebe, Lesser Black-back, Herring, Common & Black-headed Gulls. In contrast, there was little on Fingers apart from 2 Cormorant, 7 Shoveler and 3 Little Grebe. We only noticed about 4 different Grey Herons all morning. 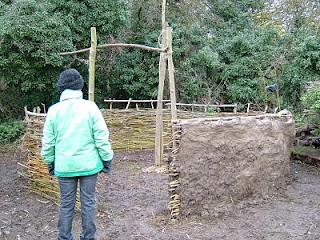 Eventually, we made it to the 'rough'. The female rangers are in the process of constructing a wattle and daub shelter for the school kiddies, with a reed thatched roof. It's to provide shelter from the sun or rain (H&S ?), but more likely to be used for nefarious purposes until some bright "spark" comes along! I hope the "long hedge" survives; it's our best leading line for migrants into the main ringing area. 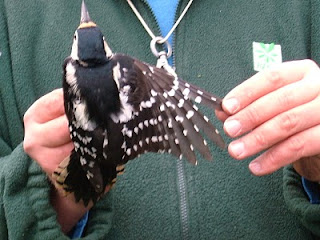 Ed was ringing this morning and by the time we rolled up he had caught 20 birds in his 3 nets. He was able to show us a Great Spot, a 1CY Song Thrush (possibly an immigrant) and a "this year's" female Great Tit, explaining how he had aged and sexed the birds.

The rest of the walk was rather uneventful; no Siskin flock found, 3 more juvenile Cormorants, a fly-by Kingfisher, a couple of skulking Teal ... and those blessed canoeists!
Posted by David at 11/21/2010 05:09:00 pm No comments: