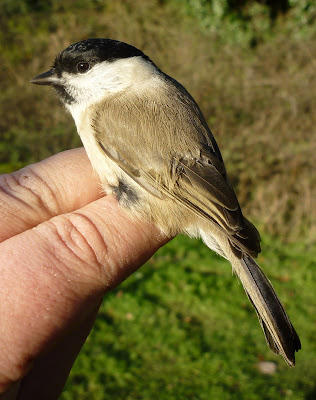 Above: This Marsh Tit V670965 (an adult) is only the third caught & ringed at this site (the second this year, the only other being in 1993). DK got some photographs for the Priory Bird Report but DB & JA missed out having already left.

Worked with the volunteer group today, opening up the plantation next to the gas station. Eventually there will be a woodland trail through this plantation. While working, Long-tailed Tits were heard at various times as they passed through and a resident Robin warmed himself by the fire! A couple of Siskins passed over and plenty of Magpies started arriving, along the Cut, at the end of the day for the overnight roost. A Kestrel flew towards the Cut but decided against it when all the Magpies started after it and it made a quick exit.

I checked out Fingers on my way back to the car but no sign of any Little Egrets and the lake was completely frozen, as was much of the main lake. On the south side the wildfowl are keeping a small area of water free of ice.