A cracking morning for both weather and birds. For a change the forecast was correct and the warmest day of the year arrived, and with it every bird in the park came out to sing, well it seemed like it anyway!

On arrival at the car park 2 Willow Warblers and a Blackcap singing. I decided to check out Fenlake first thing so I headed down the west side of the main lake. A Swift flew over my head in the north west corner, making up for the possible sighting last weekend. In the south east corner a Willow Warbler was singing. A scan of the main lake revealed 13 Common Terns.

At the river I checked out Fenlake where there were still 3 Black-Tailed Godwits busily feeding, as usual. Also a single Shelduck and a Redshank. A Common Tern flew down the river and Grey Heron stalked the far bank. At the Leat Pool a Chiffchaff was singing and little further along the river another Chiff and a Blackcap were singing. Several Sedge Warblers were singing from the Fenlake side of the river. Opposite the boat club moorings another Blackcap was singing and a female Blackbird was collecting nesting material by the edge of the river.

At the main lake hide a Coot was feeding in the reed bed to the right. 2 Greylag Geese flew into the main lake and were greeted, noisily, by 2 others that were already there. A female Mallard X with 5 new ducklings was on the south side of the lake. There were 3 Grey Herons in the south west corner but 2 left high to the north east. The Tern count was up to 14. There were 3 Mute Swans on the water and another on the nest on the island. A Blackcap was singing in the trees behind the hide.

From the east side there were still 4 Herons around the lake despite the 2 that departed. A Blackcap was singing from the other side of Wolkholm and a Great Spotted Woodpecker was calling nearby. Only 3 Great Crested Grebes could be seen on the lake.

Continuing down the east side of Fingers a Common Whitethroat was singing in the small group of trees by the navigation channel. Little of note at Kramer hide, just yet another Heron, a Reed Bunting to the left of the hide and a pair of Gadwall. A Green Woodpecker called from across Kingsmead. Continuing along the navigation channel I stopped to watch a Kestrel over the meadow and a Lapwing passed over heading northeast. At the Sewerage Farm reed bed at least 4 Sedge Warblers were singing with a couple doing their display flights.

Back at the Finger lakes by the Sedgewick a Blackcap was singing and Butterflies were out enjoying the sun including Speckled Wood, Comma and a male Green Veined White. A female Blackcap showed briefly at the back of the brambles by the Sedgewick seat. 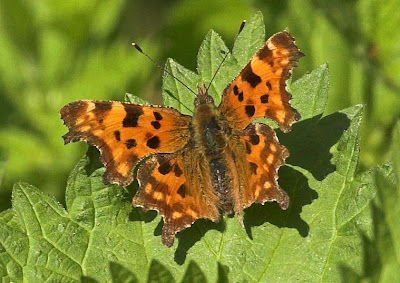 Comma
A little further along yet another Blackcap was singing: 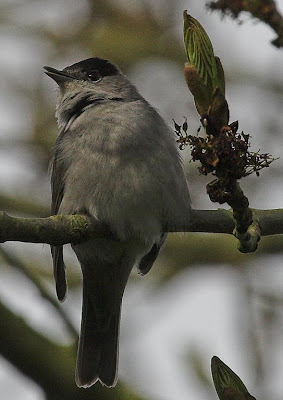 A pair of Gadwall were on the main lake, north side, between the Steps and the Spit. A Chiffchaff was singing along the Spit by the Crescent. On west Fingers the other Great Crested Grebe and Mute Swan were about along with a Terrapin. A Blackcap was singing about half way along the Spit. In the Crescent reed bed there were 2 Reed Buntings (m+f) along with at least 2 singing Reed Warblers and a singing Sedge Warbler.

Heading back up the main path to the car park another Blackcap was singing on the south west corner of the Rough. Cutting across the meadow there was a Pied Wagtail near the entrance to the Labyrinth and in the hedgerow a Garden Warbler was singing. In the plantation behind the Visitor Centre a Willow Warbler was singing. 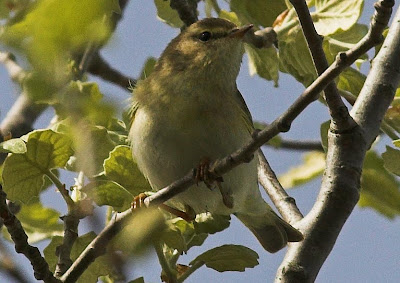 Willow Warbler
A Blackcap was singing in the hedge on the opposite side of the meadow and a Common Whitethroat was singing by the path back to the car park where the 2 Willow Warblers were still in full song.

I left PCP and headed round to Fenlake hoping for some better photo's of the Black-Tailed Godwits given then better light conditions this week. I parked behind the Oasis Pool and a Lesser Whitethroat was singing in the hedge by the cycle track. A possible pair of Common Whitethroats were together by the Fenlake Reserve information board, one was seen with nest material later. There were five Lapwing on the first field, 2 were seen mating. The three BTG's were still on the lake although they were a bit flighty. 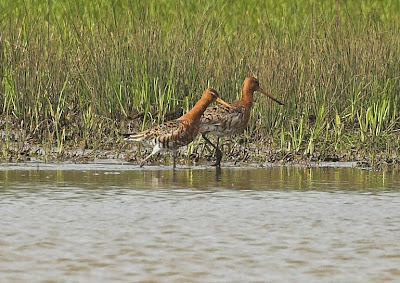 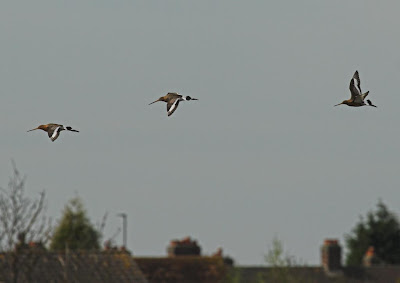 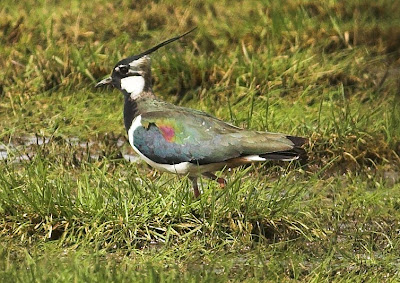 Lapwing
On the way back to the car another? Lesser Whitethroat was singing from the hedge line along the ditch and a Chiffchaff was singing in the trees opposite the Oasis Pool. A Crow and Sparrowhawk squabbled high over Aspects, drifting back towards PCP.
Posted by David at 4/26/2008 03:15:00 pm No comments:

A grey misty morning. I headed straight around to the south side to check out Fenlake where c.9 Black-Tailed Godwits were flying about fast and low before disappearing into the mist. C.15 Teal were also on the move and a couple of Lapwing were displaying. Only a single Shelduck. A Redshank called.

Blackcaps and Chiffs were regularly spaced along the north side of the river as I walked on down to the Spillway. I then turned back towards the main lake and stopped off at the Hide. While scanning the lake a couple of small Terns caught my eye and on closer inspection they turned out to be Black Terns. Having seen Dave K's car in the car park I continued around the lake in the hope of catching up with him to confirm my sighting. We met up at the beach and while scanning for the Terns Dave spotted 2 adult Little Gulls but they departed north soon after. Having confirmed the Black Terns and put the word out we headed off around the main lake.

The Green Woodpecker was drumming on the nest box in the trees opposite the Beach. We stopped in one of the east side fishing swims to scan the lake again and a Kingfisher flew to the trees on our left stopping briefly. Another or same Kingfisher did a couple of flypasts as we continued around the south east end of the lake. We stopped on the south side and tried to get a few photo's of the Black Terns but I didn't get anything worth showing, not sure about Dave. It was just too misty to get anything decent, oh for a bit of sun! While scanning for Arctic Terns I spotted a possible Swift but it was over the north side of the lake and going away when I lost it so not certain about the ID.

Back in the park other birders had arrived and located a couple of Arctic Terns over the main lake, the Black Terns were still around and remained until at least 11am when I left the park.

A couple of Pied Wagtails followed a male Sparrowhawk through the Beefeater car park, looked as if they were seeing it off!

Down at Fingers a female Blackcap along with a couple of singing males in the Rough. Chiff's on usual territories around Fingers. A Great Crested Grebe was on the nest on west Fingers and the other bird was bringing more nest material over. Both Mute swans were on west Fingers with one on the nest. Again large numbers of Swallows and Martins over the park with c.23 Swallows and c.8 Sand Martins using the dead tree on the Spit as a resting place. Little of note at Kramer hide. At the Spit the Chiff by the crescent was singing and a Sedge Warbler was in the Crescent. A male Blackcap was a little further along the Spit. There were a couple of Coot on west Fingers.

Back at the car park a couple of Willow Warblers and Blackcap were singing as I left.