Saturday morning proved quite productive, helped by the fact that the ringers were in. They caught quite a number of birds while we were there including this handsome Redwing and Treecreeper. A Goldcrest, Blackcap and many Blue Tits also found the nets. 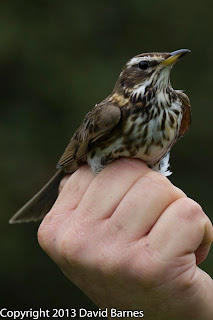 Around the park we also had a good selection of ducks on the Finger Lakes along with a couple of Little Grebes. A flock of 29 Wigeon were circling over the park for a while early on and later we had 45 Lapwing and 6 Golden Plover over. At least one Kingfisher was active around the park.

On Sunday it was a bit quieter, the variety of ducks was similar but no Little Grebes were seen.

Sunday was also volunteer day and we had a great turnout to continue the work on the plantations by the overflow car park. Judging by the size of the bonfire the day went extremely well with much of the second plantation cleared. A job well done, thanks to all who helped during the day.

Had Water Rails Sharming on both mornings, with a little provocation.

Speaking of the Willington Starling roost I managed to pop over on both Saturday and Sunday evening. Numbers were down on the previous weekend and both days the murmuration displays weren't the best. Sunday was particularly poor with groups of birds going straight into the reed bed without little or no display. Numbers were good, with several large parties coming in, and probably numbered 6000+.

Saturday provided a better display with similar numbers to Sunday but the bulk of the birds stayed out and joined up before heading into the reed bed. The star of the show was the sunset which was stunning.