A bright morning with a cool wind blowing. A Willow Warbler greeted me with song as I got out of the car. Along the main path Blackcap and Chiffchaff were heard singing in the Rough. At the Beach the Green (LSW) Woodpecker was doing his impersonation again. A single Lapwing flew over heading South.

At Kramer hide a single Great Crested Grebe and a pair of Canada Geese. A second pair of Canada Geese flew and stirred things up a bit. A couple of Wood Pigeons had a slapping match over by the fallen tree. Little else going on so I headed off along the river. Very quiet on Kingsmead just odd CG's, Moorhens and Pheasants. A Chiffchaff singing in the Long Hedge by the steps into the woodland walk. At the bridge over the Cut, across from the Kissing Gate, a Green Woodpecker was calling from a tree upstream from the bridge and a Blackcap was singing nearby. I walked along the cut to the trail marker post where another Blackcap was singing.

Back at Kramer hide, little change. A young Heron was in the usual tree. The four CG's seemed to have settled down and were tolerating each other. A Blackcap was heard directly behind the hide as was a Song Thrush. Just 3 Sand Martins over Kramer lake. I headed around to the Sedgewick seat and as I turned left between the two plantations after Fingers a Willow Warbler was heard in the plantation on the right. A Blackcap was heard in the plantation to the left. The usual Chiff was singing round by the Sedgewick seat. Directly behind the Sedgewick seat a Treecreeper was creeping up a tree, as they do. Possibly a second but didn't get a good look. Heading down the path by the Rough, towards the steps a Chiff was singing by the muddy section. Another was singing over the far side of the Rough. 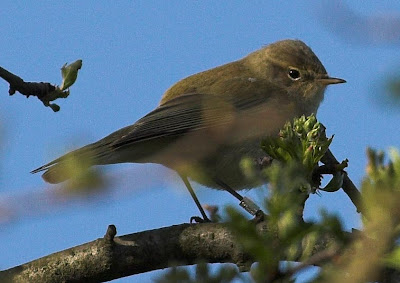 A Blackcap was skulking in the bushes nearby while another sang further along the path. Yet another male Blackcap was further down the path by the "S" bend before the steps along with a female. On west Fingers a pair of Gadwall and a pair of Great Crested Grebes. One of the Grebes looked to be sitting on a nest although both were seen away from that area later. The pair of Mute Swans were about and the female was on one of the fingers nest building before mating with the male: 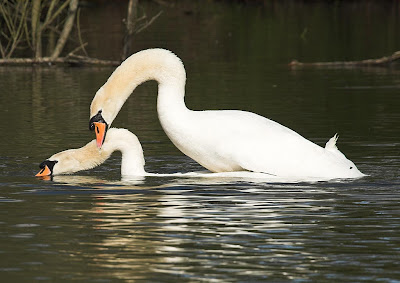 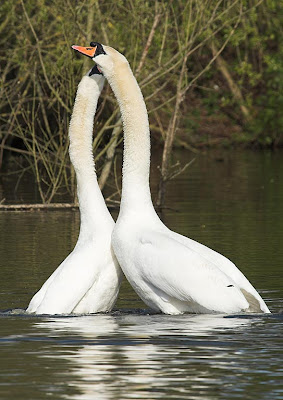 At the spit a singing Chiff in the trees by the Crescent reed bed: 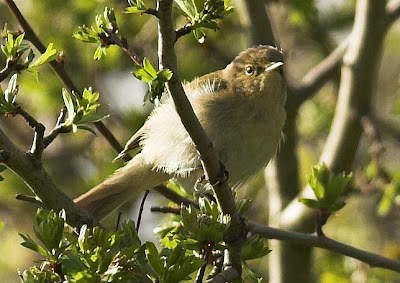 Also on west fingers a pair of Mallards and a couple of pairs of Canada's. A Willow Warbler was singing about half way along the spit and a Blackcap was further down in the fenced off section. A pair of Little Grebes were whinnying in the Crescent reed bed. There is some frog spawn in the south west corner of east Fingers. A female Reed Bunting was also in the Crescent reed bed.

Headed around the main lake, failed to spot any Grey Wagtails along the Canoe Slalom but a Chiff was singing in the woods behind. Crossed Marina Meadow bridge and a Song Thrush was singing over by The Barns hotel. Continued along by the river in the hope of Grasshopper Warbler, at least one Chiff in Press Mead, probably more. By the Bedford Boat Club Moorings a Blackcap was singing on the park side and a Chiff was singing a little further upstream on the boat club side. A Greylag and 3 Canada's were on the river. No GHW but a male Reed Bunting was over on Fenlake.

Stopped at the "disabled access" fishing swim on the west side of the main lake and a Sedge Warbler was singing from the fenced off area of the sailing club. Watched for a while and got a few glimpses as it moved in and out of cover.

Back at the car park a Blackcap was singing and 2 female Sparrowhawks were overhead. Looked like one was seeing off the other, or at least it was trying to.

As they say - better late than never. Thursday 3rd April saw me waiting at 6am by the visitor centre for half an hour before helping Errol with the ringing activities. A short disappearance by me at 8.45 am and I was back at 9.45 am with BTCV volunteers constructing willow spilings on the main lake close to the Visitor Centre for the rest of the day. Around lunchtime a Kestrel hovered over the Island on the main lake. Saw the (pre massacre) frogs on the dipping platform near the Rough. Oystercatcher calling on far side of main lake & flying around in the afternoon. Will keep you posted on BTCV activity around the park.
Posted by BTCV Ed at 4/11/2008 07:48:00 pm No comments:

Two more different days you couldn't experience. Bright and sunny on Saturday, Grey and snowy on Sunday. I'm going to cheat and supplement my comments with DK's post to Beds Birds.

I thought that spring had arrived yesterday when I had 18 Chiffchaffs,
15Blackcaps, c140 Sand Martins and a Swallow at Priory. Willow Warblers however have been around the same for the last week with no increase in arrivals. John Bishop's sighting of the Osprey yesterday was an excellent addition (39th record for Priory), however as it was at around 11am most of the regular birders had already gone home! This morning was a bit different as it was snowing quite hard early on. Nevertheless it didn't deter the c160 Sand Martins and a Swallow over the lake, a couple of singing Willow Warblers and a few (far fewer than yesterday) Chiffchaffs and Blackcaps. DaveK.

Can't believe I missed the Osprey. I think I was behind the sailing club when it put in it's appearance! In the words of the great Homer Simpson "DOH!".

On Saturday I met John (BTCV) at the hide, he mentioned a possible Otter on Thursday but he had only seen the bubble trail not the Otter itself as it disappeared down the channel to east Fingers. He did try to see it on east Fingers but ,as is the way, it didn't show up the other side of the gap. John also mentioned he had seen 25 frogs in the flooded section of the dipping platform, opposite the Rough gate. We wondered how safe they would be there as it would be difficult for them to get out of there in a hurry. We wandered round there and were greeted by carnage. Our fears had obvioulsy been realised as bits of Frog and patches of blood were all over the platform! Good news is that I came across a large number of frogs and toads at the Leat Pool. There was a fair bit of frog and toad spawn. For those of you who don't know the frog spawn is in big balls and the Toads is in long strings. Please do not remove/deposit spawn from/in the park lakes, there is a disease in frogs which can be transferred to new areas by doing this and it could destroy local populations. The Lesser Spotted Woodpecker I called last week turned out to be a Green Woodpecker doing a damned fine impression, Grrrrrr! Put that one down to experience. We also had a female Mallard with seven ducklings on west Fingers, over by the Dead Seat as seen from the Spit.

On Sunday the Little Grebes in the main lake (north side reeds near the steps) and west fingers were still about as yesterday, but also a pair in the flooded crescent reed bed. A Grey Wagtail, possibly more than one, flew over at the Beach and also later up at the Beefeater. Three Shelduck did a fly past, heading south west and then turning and heading back north east. A pair of Gadwall were on west Fingers. As DK said far fewer warblers this morning, not surprising given the temperature, didn't seem to put off the Sand Martins though, was hoping I might find them all shivering in the reeds, as DK did the other week when it was cold, but they were all out and about feeding on some equally hardy insects!