It's about time I posted an update so here goes:

The most recent guided bird walk, last Sunday, was well attended with 20 people joining me despite a very wet morning. Despite the rain we racked up a good species list with excellent views of a couple of Great Spotted Woodpeckers, a Little Egret and a Treecreeper being the highlights. The Treecreeper was a right little show off, very unusual for this normally secretive little bird. We finished off the morning at the Golden Plover flock on 100 Acre where ~3000 gave us a great display along with a few hundred Lapwings. Thanks to everyone who made the effort to join me on such a miserable morning. The next one is Sunday the 28th February at 9am, meet outside the visitor centre. Hopefully it will be a bit drier!

Today a few of the Sunday Volunteers spent the day coppicing the Willows along the edge of the main lake adjacent to the Finger Lakes. With the prevailing wind from the south it made for quite a cold and blustery day but we managed to get most of the older growth Willow coppiced leaving the the younger stuff for next winter.

Over recent weeks we have had quite a few good sightings in and around the park. A single male Goldeneye has been spotted on several days on the main lake. Pintails and Goosanders have put in more fleeting appearances. On 100 Acre at least one pair of Stonechats have been seen regularly. The Golden Plover flock has peaked at around 4500 which makes for a spectacular sight when they all get up in the air together. This weekend there were about 800 Lapwings which is about as many as I have seen here over the winter. Redshanks have arrived in the last couple of weeks and a couple of Dunlin spent a few weeks mixing in with the Golden Plovers although we didn't spot them this weekend.

Two Ring-necked Parakeets are providing a bit of colour, and noise, for the park with regular visits over the winter, the most recent being today when they flew over the visitor centre as we packed away the kit the volunteer group had been using. Earlier this morning I had great views of a flock of Siskins in the Alders by the Crescent reed bed and a brief stop by a Redpoll in the Rough was better than the usual flyover sightings we've been getting.

The various roosts in the park have generally been down in numbers this winter although the Jackdaws still provide quite a noisy spectacle when they all leave in the morning. The mild weather seems to have kept the Corn Bunting roost pretty small although when we did have a brief cold spell the numbers jumped to 46 on one morning. The Little Egret numbers also jumped up during the cold spell. Having been at 3 or 4 for most of the winter the numbers suddenly reached double figures and have remained at those levels since.

And finally, there has been a family group of up to 4 Otters in the Park and over the last several weeks, a mother and 3 well grown cubs. I finally caught up with 3 of the family this morning at the Sewage Works bridge. 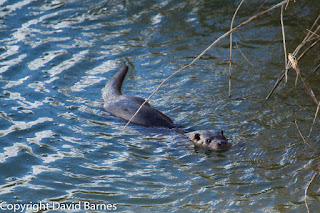 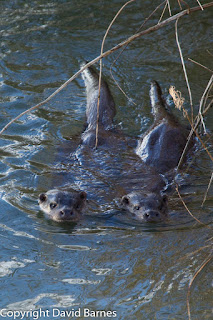