A pretty quiet morning in the park. The usual suspects on the wildfowl front with Pochard, Gadwall, Tufted Ducks and Wigeon on the main lake. A couple of Little Grebe were on the north side of the island. A small party of 7 Siskins were in the Alders by the Crescent. The Crescent reed bed has had a partial haircut, the final cut of a three year cycle so it'll be back to the first section for next winters cut.

3 Shoveler were doing circuits of the park and stopping off in west Fingers between circuits. A handful of Teal were tucked way up the back of Fingers, just about visible from the spit and also from Kramer hide. A couple more Little Grebe were on east Fingers and the pair of Great Crested Grebes were moving between the 2 main Finger Lakes.

At the STW 100 Acre proved much less productive this week with much fewer geese, a few Canada around the small lake and 40+ Greylags to the east of the big lake. Also on the big lake a couple more Little Grebe, a couple of parties of Tufted Ducks and few more Canada Geese. On the small Lake a pair of Teal and 4 Tufted Ducks.

At the main lake hide the female Goldeneye was quite close on arrival but moved further out. The Pochard were a bit more trusting and stayed fairly close by. Canada Geese are staking out nest sites on the island.

The female Stonechat showed well, after a short wait, on Fenlake as viewed from the Priory side of the river. it was making use of the fence posts on the east side of the main "lake" on Fenlake.

Little else of note on the way back to the car park, although the Ivy along the back of the sailing club is loaded with berries and looks promising for Blackcaps, nothing doing today though.
Posted by David at 2/12/2011 06:09:00 pm No comments:

A very windy day for the volunteer task, but it didn't put our volunteers off! They got stuck in to removing a fence, clearing bramble and then after lunch, finishing the willow coppicing task started last time. 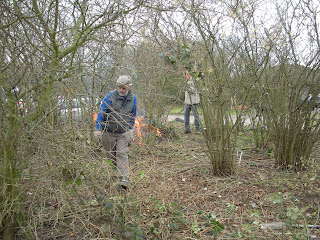 "Now where did that fence go? I'm sure it's around here somewhere..." 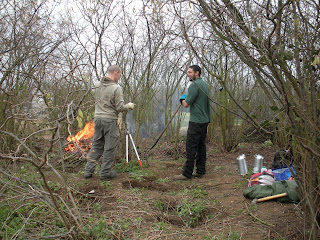 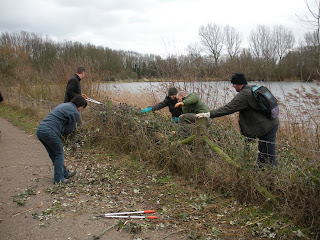 And the winner of the world's first bramble bashing competition is.......

Thanks to all our volunteers for their hard work. The next task is on the 6th March - Scrub Management.

I got to the park early and headed straight over to 100 Acre to check the goose flock which held a 1st Winter White Front (per TP) as well as the Pink Foot and Egyptian that I reported yesterday. All the geese were at the north side of the big lake so I headed up to Meadow Lane and across 100 Acre to get a better view. There were still good numbers of Greylags (~120) along with large numbers of Canadas but no sign of anything different, not to say that there wasn't anything tucked up in the long grass, but nothing visible while I was there. Small parties of Greylags came and went, during my visit, seemingly moving to Willington or Castle Mill.

On the way back to the park I met DK who also hadn't managed to spot anything different although he had viewed from the STW entrance so much more difficult from there. We discussed the Pink Foot vs White Front question but were both confident that the bird we saw had the short pink beak of a Pink Foot. The White Front was also reportedly walking badly and generally looking in poor condition. From the short bit of movement I saw of the Pink Foot it was moving OK but it did spend most of the time sat down in the long grass.

Anyway back to the volunteer task and a good number of volunteers turned out today with a couple of new faces swelling the ranks of the regulars. We started off by removing the old fence from around the hazel copse at the back of the Visitor Centre. We also cleared a lot of bramble to open up the copse. During the bramble clearance a Water Shrew scurried across the path in search of new cover.

With all the help the first task was put to bed by lunch so after a short break we headed back to the scene of last months task to finish off the Willow coppicing along the north side of the main lake. A strong south westerly wind was a bonus as it had the effect of felling most branches onto the bank rather than into the lake. Having battled the brambles in the morning I continued the contest in the afternoon by picking the Willows in the large bramble patch to do my work. Needless to say I ended the day with a few extra scratches and scrapes to add to my collection, but we managed to cut back all the larger Willows leaving just those that were coppiced last year.

We cleared up and headed back to the VC before departing for home and well earned hot showers all round.