Bright sunshine and a keen northerly wind. 30 Cormorants.
3 Ruddy Duck on Thurs. (DK). 8 Dabchick, split 5 & 3, 8 Shelduck, split 3 & 5, 5 Herons scattered round the site. On Wed. there were 2 male Tufted on lilypads playing "no mates" and only 6 Dabchicks. The pair of GCG were "at it" again, being saucy. 2 Water Rails (1 seen) in the reed bed. I saw the one that was "chased off" from the north corner over towards the bridge/path.
One thing I did notice was the paired up Robins & Dunnocks. Last week we noticed brood patches forming on both these species. This time it was obvious which bird was the male - and not just because it was ringed. Of the ones I saw, the females did not have a ring on, perhaps because they were "immigrants" from a part of the park that we don't net.
No drumming woodpeckers today; Ray Roche and I saw 5 Gt. Spots., 3 males, 2 drumming + 2 attendant females, challenging each other over lilypads & the crescent, only to disappear towards the C/M weir. No singing Mistle Thrush today either.
Posted by Unknown at 2/01/2008 02:45:00 pm No comments:

Very little to shout about this morning. No Otters at Kramer hide. There were 2 Little Egrets on roost until about 07:30. The Corvids were very noisy as usual but left in dribs abd drabs this morning rather than the usual mass exodus. A juvenile Mute Swan was feeding in front of the hide for a while before moving off around the lake.
On east Fingers there were 4 Shoveller (3m1f) and a Tufted Duck. No sign of the Goldeneye. On west Fingers there were at least 3 Little Grebe although all but one were in the reeds so possibly more. The pair of Great Crested Grebes were doing a bit of mirroring for a while but didn't go any further. There were a pair of Mute Swans one of which had an orange ring, so not the original resident pair. Couldn't get the number but wonder whether 500 is back on her old patch?
Best of the morning was the Siskins in the Alders by the crescent which were in the low branches and very approachable to within 5m. There were at least 7 and some stayed for a picture, sadly a bit grainy due to the low light level. Shame they weren't about in the sun yesterday: 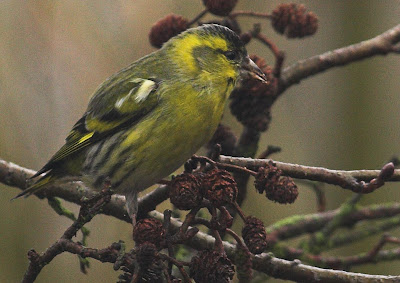 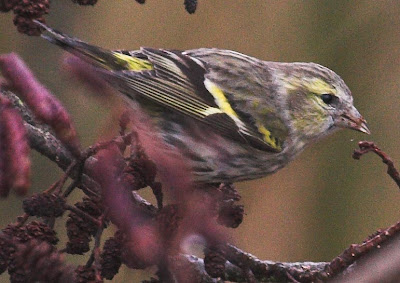 Plenty of Mute Swans on the main lake again (c.45) and about 14 Cormorants counted from the north side of the lake.

Got to Kramer hide about 07:45 and it was very quiet with just a couple of Moorhen about. Plenty of white feathers under the area where the Little Egrets roost so looks like they were in last night but had already gone by the time I got there. Other visitors during the morning were:

At about 08:00 there was a brief glimpse of an Otter in the channel to east Fingers and a few minutes later it appeared by the left reedbed and swam across to the left side island. A few more minutes passed and it appeared again in the channel to east Fingers swimming towards the leaning tree where it came out of the water and climbed over the base of the tree before reentering the water and swimming through to west Fingers. It wasn't seen again before I left the hide at around 09:00.

East Fingers held 10 Gadwall, a pair of Shoveller and a pair of Great Crested Grebes. The female Goldeneye, from yesterday, was still there also. 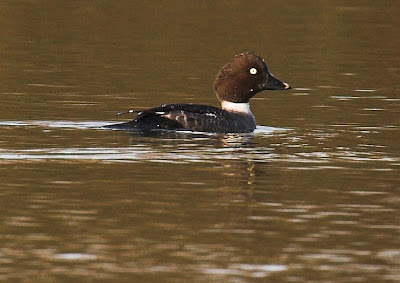 Something put up all the ducks from east Fingers including the Goldeneye which was the only one to return.

I walked around to the spit to check out west Fingers:

I walked down to the crescent, on the way back along the spit, noting another 2 Little Grebe on east Fingers. A Water Rail squealed from somewhere in the crescent. Wellies are the order of the day if you want to walk through the crescent.