Monday 1st - 12 Swallows in a hurry south, followed by 4 House Martins about 09:30. On Fingers - 18 Shoveler, 2 Wigeon (again), 1 Tufted, 3 of the 9 Gadwall visible and 3 Dabchicks. Some Sky Lark activity but not as much as yesterday. Tony P had 4 Chiffs and a Whitethroat.

Tuesday 2nd - grey and damp; only the one swallow seen, but light passage of Sky Lark (largest party = 3) and couple of blogging Mipits. Treecreeper in the "rough" and the Whitethroat was in the "long hedge". 2x (?) parties of 28 Redwing rushing around, plus a few spares, but only caught the one. Best bird was an adult male goldcrest (see pix). 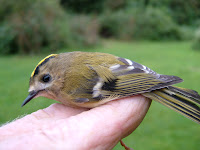 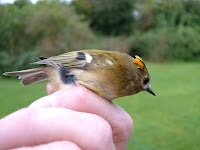 Also trapped, a Lotti ringed in Sept. 2003. 6 young Blackbirds were ringed, all fresh in, and a large-winged, male Chiff with a particularly loud call. A small party of Blue Tits were all female (mostly this years). 32 birds in all from half-seven to half-three.
On the Fingers, the same mix of species as yesterday - with the exception of the Coot, which has put in another appearance. I had 11 Shoveler overhead following a disturbance and there were 7 on 'Lilypads' a little later.
Weds. 3rd - rained as I arrived so might have missed any hirundines. Fingers held 9 Gadwall this morning, 11 Shoveler, 3 L.Grebe and 3 Wigeon - and 1 Coot. I had three Chiffs and some Bullfinches walking the main lake; also 11 GC Grebe & 9 "black death". Robins seemed to be occupying the whole site with their calls and songs. There's been a Common Sand about lately, I hear.
Thurs 4th - a brighter day. A steady if light passage of Sky Lark (2-3/hr) SW; not much else during the morning. Put a net in a new position and caught the intended Kingfisher (young female). Dk reported 8 Chiffs but they all seem to have s****d off overnight as the weather was clear with light winds.
Friday 5th - had a couple of nets up around Fingers but not much doing; certainly no chiffs! Coot numbers have doubled (to 2 - lol). From the 'spit', I counted 20 Moorhens on "lilypads" with the Shovelers, Wigeons, L.Grebes & Grey Herons; sounds peculiar when you put an 'S' on the end!
Going back for a "roost netting session" later today, so ............. Roost, my a***. 1 Blackie & 1 Redwing. 23 other birds including 6 Greenfinch, 4 chaffinch & 2 goldfinch. Oooh, and a second Goldcrest of the autumn. This week, I have ringed 11 new Dunnocks at PCP, which is really unusual. Perhaps they really do migrate, even if this is not very far by others standards. The corvids put on a real display tonight - it went on for a very long time (over 20 mins).
At 18:15, we went to see if the egrets were about, and lo and behold one flew in on cue. 20 minutes later, another flew in, quickly followed by a third.
Sat. 6th - sorry about this, but I've decided to go and catch some Coal & Marsh Tits in the girl-friends back garden in Norfolk. Back soon. [Marsh turned out to be a WILLOW !!]
Posted by Unknown at 10/01/2007 04:06:00 pm No comments: 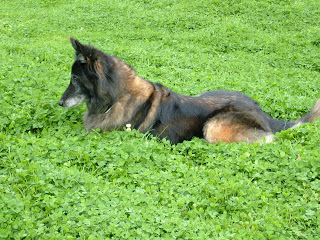 Walkies this am around Fingers produced: 8 Heron, 3 Dabchick, 1 Tufted, 2 Wigeon, 9 Gadwall, 8 Shoveler, 3 Teal, 8 Mute Swans with 4 cygnets. Up above - 2 House Martins, sunning Great Spots., a vocal Chiff, 3 Bullfinch, 3 Song Thrushes, many Robins inter-acting & several Sky Larks. The Moorhens that had a late brood of 5 seem to have gotten at least 4 to fully grown. 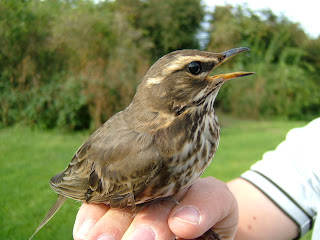 1st autumn Redwing
Went back at 3pm and set the nets up. We were hoping for lots of Redwing and Blackbirds. Ha ha. Actual total wasn't bad, as follows (retraps in brackets) - wren (1), dunnock 5 - all youngsters (supposed to have been a passage movement), blackbird 1(2), Redwing 2, Reed Warbler 1 fat imm., Blackcap 1 even fatter imm. female, Lotti 3(3), blu tit 6(1) - the most we've caught all year, gt. tit 1, CHAFFINCH 10, greenfinch 6, goldfinch 5. Also caught 6 greenfinch & 8 goldfinch in the garden soon after first light.
Lots of Jackdaws piled in to roost and chacked away for a good twenty minutes. Not many crows in there tonight unless they came in from a different (non-visible) direction. A very large corvid with a slow wing-beat went east (towards Sandy) - was it a Raven.

Tonight's sunset (It got better - 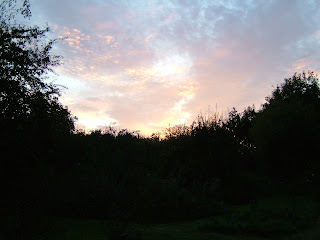