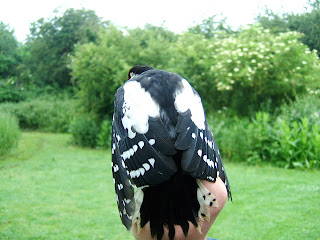 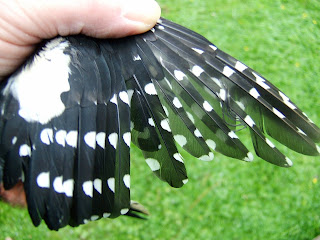 A couple of images from 10th June of a juvenile Great Spot. and the beginnings of its wing moult. 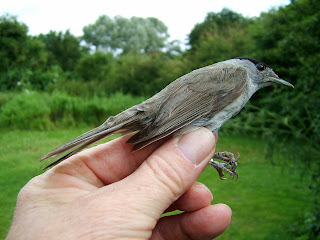 A quiet day - CES ringing produced only 13 birds, 6 of which were retraps incl. a Blackcap from 2005. There were 90 Mallard loafing (in ecclipse) on "Lily Pads" and the Mandarin. The GCGs seem to have lost one of their 4 chicks. There was a cacophony at 05:30 when the Crows & Jackdaws left the roost; no count; but over 100 birds heading off over main lake. Green Wood very evident - one seen feeding young on a mown path. 4 Great Spots flew over in procession. Two family parties of Goldfinch, one of 7 birds. Turtle Dove starting singing as the sun came out late morning.
Posted by Unknown at 7/14/2007 08:19:00 pm No comments:

Attended the guided walk at Bedford Park, the highlight being Spotted Flycatcher at lake entrance. Then off to Priory for a quick look around. Several singing Blackcaps around the Finger lakes and a Common Whitethroat singing by the navigation channel. Highlight was finding the the wrens had hatched and at least 4 youngsters in the nest. 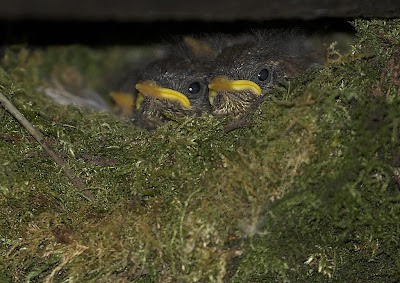 I also got my first look at the Great Crested Grebes since they left the nest. The four youngsters are still going strong and getting to the stage where the adults don't want to give them a lift. That doesn't stop them trying though! After several attempts seems they might finally have managed a very good return for their efforts, assuming all four survive.

Only walked around the Finger lakes but did note at least 20 Common Terns over the main lake. Also a Reed Warbler singing strongly in the main lake reed bed near the steps into Fingers.

Things are on the move with all those young birds. Young Common Terns in with parents over main lake - over 20 birds at times now with some loud begging going on. Marsh Tit along Spit at 9.30 on Wed 4th, atop an umbellifer. Also Mandarin. An Arctic T. present early am of 9th. picked up on call. Young fluffy Chiffs moving through the Willows. First Willy for ages (one Norwegian-ringed one early on and then another hybrid, adult Chiff-Willy) caught on 7th. Young Garden Warblers and Common Whitethroats now on the wing. The latter seem to be down in numbers this year. Some better news - young Blackbirds seem to be doing well. Found a Cetti's singing in park. Turtle Doves still purring and visiting nest site. Much Swift activity early on most mornings - have had 34+ at once - but the hirundines disappear when the sun gets up. Fox cubs much in evidence/to Layla's liking. There was a loud gun shot at 9am on 9th - was Ray B after one that had strayed over on to Kingsmead? I had heard fox calls from that direction earlier.
Saturday's ringing results (adult, juv.) - Dunnock 2,5; Blackcap 2,4 - second broods due off soon; Blackie 2,1; Garden W 1,4; Reed W 1,1; Chiff 1,1; Wren 0,1; Goldfink 0,2; Willy 0,1; W/throat 0,1; Monday' short session - Sedge 0,1; Garden W. 0,1; Chiff 0,2; Bullfink 1F,0; Reed Bunt. 1F,0; Reed W 4M+2F,0
Posted by Unknown at 7/09/2007 01:33:00 pm No comments: