As the heatwave continued, this demanded a 5am start. Temperature was 20C by then and not a cloud in the sky. The reeds that were cut last winter are as tall as those that weren't and the whole of the small reed bed (the crescent), which is a mere 0.16 hectares, is taller than I have seen it for many a year. This meant that shortly after arrival, a Kingfisher passed over the net.

Yesterday, there was a Little Egbert on 'lilypads' but not today. A juvenile Gt. Spot was trapped (see photo), a young Willow Warbler, a fledgling Wren plus a 4-year (or more) old female, a male Blackcap that was first ringed down by the 'sheep pen', and 5 tits that were just starting their moult into adult plumage. 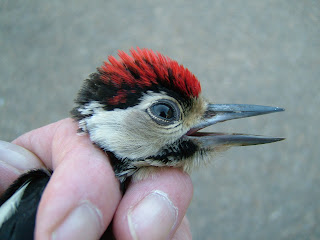 Juvenile Great Spotted Woodpecker - the red cap is diagnostic of a young bird.
Adults have their "patches" on the nape. This bird also has a 'dull' eye.

Out of the 10 Reed Warblers, only one, unusually, was a re-trap; they comprised 3 females, 4 males and 3 juveniles. An old male (on features and wing-length) was already thinking of "packing it in" (going by the amount of 're-feathering') and returning south in the not too distant future.

There were many small flocks of young birds, with or without their parents feeding in the willow trees. At one point, a (male) Buzzard followed by a mewing juvenile flew across the 'Fingers' at tree top height. By 8am, the temperature was beginning to soar and the heat was beginning to become unbearable, meaning that catching was coming to an end.
Posted by Unknown at 7/02/2009 08:43:00 pm